MYSTERY MACAWS OF THE WEST INDIES. 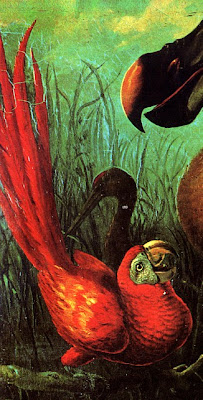 One of the most famous depictions of the dodo Raphus cucullatus is the beautiful oil painting by Flemish artist Roelandt Savery (1576-1639), which was painted in Holland in 1626. It was once owned by George Edwards (1694-1773), a very talented English bird painter and author in his own right, and it is now housed at London's Natural History Museum. This great work has become virtually the 'standard' notion of what the dodo looked like in life (though in more recent times, the veracity of its chubby form has been questioned), and has thus attracted great attention. 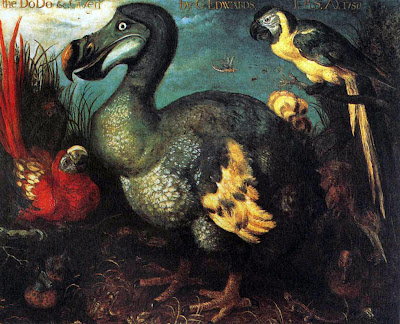 In stark contrast, almost entirely ignored from an ornithological standpoint are the two very striking, colourful parrots that Savery painted to the dodo's immediate left and top-right in this same painting. Judging from their size and form, they are evidently macaws, but they do not resemble any known species. Apart from its green facial skin and some golden tinges to certain wing plumes, the left-hand macaw (seen in close-up in the illustration heading this present ShukerNature blog post) is almost entirely red. And the top-right macaw is totally green and yellow except for a black half-collar and white facial skin.

Interestingly, Japan's dodo expert Masauji Hachisuka owned a copy of Savery's painting, prepared by another famous but much later bird artist, John Gerrard Keulemans (1842-1912), which is a near-identical reproduction of Savery's, except that the colours of the macaws are more distinct (and the dodo itself is more brown than grey), emphasising the red plumage of the one bird and the green and yellow of the other. 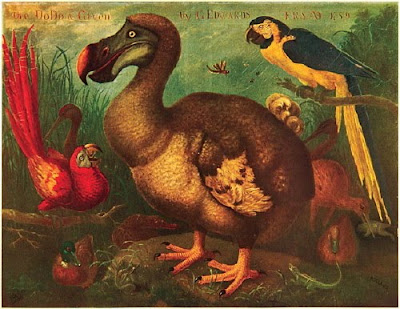 Owned by Masauji Hachisuka, a copy by Keulemans of Roelandt Savery's dodo painting

If these macaws were meant to be real, it suggests that they may be lost (and possibly even undescribed) species, or unusual freak/hybrid individuals (but what happened to the specimens that they were based upon?). Or could they have been 'invented' by Savery purely as colourful support for the more prosaic plumage of the dodo? Or perhaps they did exist but Savery's depictions of them were based not upon physical specimens but instead upon inaccurate verbal descriptions of known species?

Oddly, the top-right macaw in Savery's painting looks very like the familiar blue and yellow macaw Ara ararauna of the South American mainland would look if its blue hues were completely replaced by green, so might it have been a rare colour mutant or even have been based upon a preserved, sun-faded skin? Or could the painting itself have faded? Even if any of these possibilities are true, however, and this macaw were indeed blue and yellow after all, it would still differ from A. ararauna - due to the fact that its under-tail coverts were yellow whereas those of A. ararauna are blue. 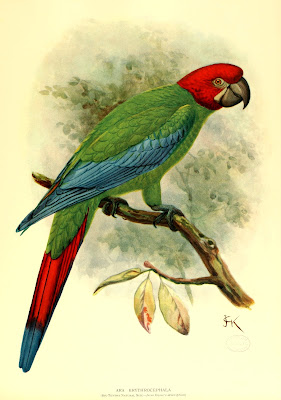 But the other one, the Dominican green and yellow macaw Ara atwoodi, believed to have died out around 1800, was indeed predominantly green and yellow. Today, it is known directly only from a short description penned by Thomas Atwood (after whom it was named) in his The History of the Island of Dominica (1791). Here are the relevant pages: 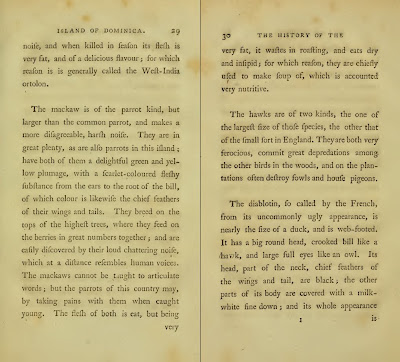 Could it be that at least one such bird was brought back to Holland, perhaps as a pet, over two centuries earlier, thereby explaining the tantalising bicoloured macaw in Savery's painting?

And what of Savery's other mystery macaw? Various red macaws seemingly existed several centuries ago on Guadeloupe and Hispaniola. Indeed, when visiting Guadeloupe in 1493, Christopher Columbus's landing party claimed to have observed "red parrots as large as chickens" there (or guacamayos, as referred to by the native Caribs at that time). Furthermore, during the 1650s, French missionary Jean-Baptiste Du Tertre described these very distinctive red macaws of Guadeloupe, which he termed the arras, as follows:

"The Arras is a sort of Parrot bigger than all the others. This is proved because those of Guadaloupe [sic] are larger than all the other Parrots, both those from the Islands as well as from the Mainland; while this Arras is larger than these by one third. It has the head, the neck, the belly and the back of the colour of fire; its wings are a mixture of yellow, azure, and crimson feathers; while the tail is entirely red and a foot-and-a-half long."

This bird has never been identified with any species alive today, but readily recalls Savery's mystery red macaw. Could a specimen brought back to Holland have thus been the model for his red macaw? Interestingly, in his book The Dodo and Kindred Birds (1953), Hachisuka included Keulemans's painting as the frontispiece and in the accompanying caption stated that the two macaws were indeed from the West Indies. Moreover, during the past few centuries the West Indies may have lost several endemic species of macaw.

Although I have since read more detailed accounts about them elsewhere, I first learned about the Caribbean's lost macaws from Purnell's Encyclopedia of Animal Life - an extremely comprehensive, authoritative six-volume wildlife encyclopaedia first published during the 1960s and edited by zoologists Drs Maurice Burton and Robert Burton - which included the following very succinct summary of most of them:

"The red macaw of Jamaica has not been seen since 1765 and the green and yellow macaw of the same island became extinct in the early 19th century. The Guadeloupe red macaw became extinct a century before this [i.e. during the early 1700s] and the Dominican green and yellow macaw in the late 18th Century. The Martinique macaw has not been heard of since 1640 and then there was one which has been called the mysterious macaw. No specimen of this is known but a description of it was published in 1658 - and that is all we know of it except that it lived on 'one of the West Indian islands'." 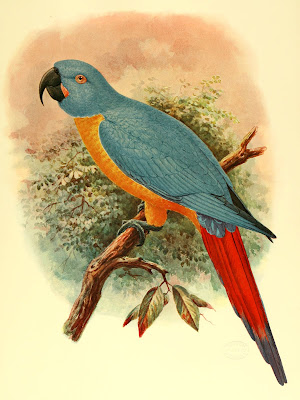 Additional erstwhile Caribbean macaws not noted above by the Burtons include the Cuban red macaw A. tricolor, the seemingly-unnamed Hispaniolan red macaw mentioned by me earlier, and the purple macaw Anodorhynchus purpurascens of Guadeloupe (click here for a ShukerNature post of mine devoted to this latter species and the even more obscure black macaw Anodorhynchus ater). Brief details and specially-commissioned full-colour paintings of most of the above forms appear in Lord Walter Rothschild's classic work Extinct Birds (1907); some of those illustrations are reproduced here. 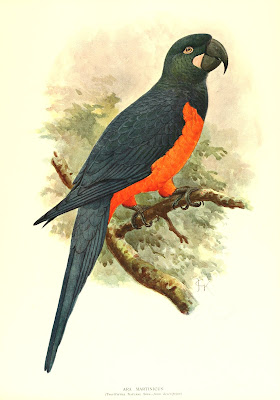 Yet because almost all of these ostensibly vanished macaws are known only from descriptions and paintings, not from any physical remains (the Cuban red macaw is the lone exception, being represented by several preserved specimens in various museums around the world), some ornithologists have discounted them as hypothetical species that may never have existed. 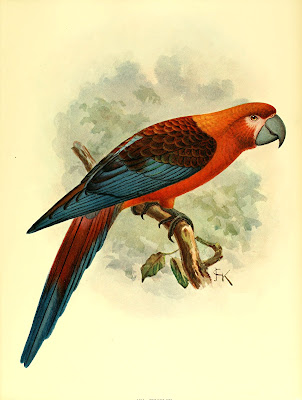 Instead, they suggest, these intangible birds may have been based solely upon misidentified or inaccurately-described known species (possibly even escapee pets belonging to certain mainland South American species) or hybrids of known species. 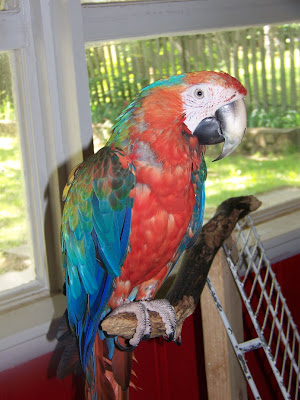 In addition, parrot expert Tony Pittman has mentioned to me that A. gossei might well have been A. tricolor brought or traded in from Cuba. He also noted that a very beautiful mutation of A. ararauna occurs naturally in Brazil where it is termed 'A. mosaica' (thereby providing a precedent for other mutations similarly occurring in the wild state and possibly even explaining some of the Caribbean's mysterious lost macaws). 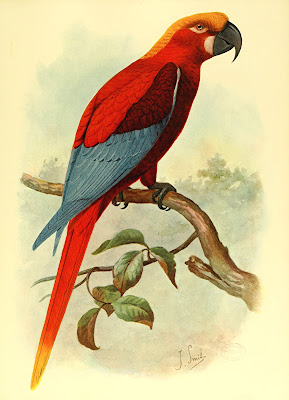 Irrespective of these latter contentious (albeit scientifically-named) macaw forms, however, there is always the intriguing possibility that there were others (certainly two, the enigmatic macaw of St Croix, St Vincent, A. autocthenes, known only from a single leg bone; and the unnamed Montserrat macaw, known from just a single coracoid) that died out before their physical appearance had even been documented - except, perhaps, for a couple of perplexing portraits alongside, ironically, the most famous demised bird of all, the dodo? 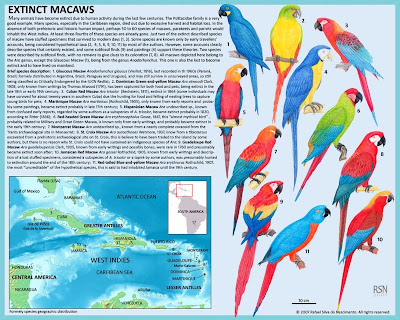 Over the years, I've acquired a number of cryptozoologically-relevant items from antique fairs, bric-a-brac markets, and even car boot sales, but sometimes what makes such a purchase so interesting is not what it is to begin with but what it can be converted into. This is well illustrated by the little figurine of a South American blue-and-yellow macaw A. ararauna that I purchased during the summer of 2012 for just £1.20 from a charity shop in Stratford-on-Avon.

Out of all of the lost Caribbean macaws the Dominican green-and-yellow macaw A. atwoodi has especially interested me because although today's surviving species of macaw collectively display a wide range of plumage colours and colour combinations, not a single species is predominantly green and yellow. Perhaps the nearest living species is the blue-and-yellow macaw, because if its blue feathers were replaced by green ones, it would then closely correspond with the reported appearance of the enigmatic A. atwoodi.

Seeing the little figurine of the blue-and-yellow macaw in the charity shop, it occurred to me that if I carefully repainted its blue plumage green, I could create my very own unique figurine of a Dominican green-and-yellow macaw! So I duly purchased it and took it back home, but then I had a change of plan. Why go to all the trouble of painstakingly painting the figurine by hand, and risk doing a less than perfect job, or even entirely ruining it, when all I needed to do was photograph the figurine, then convert its blue feathers into green ones digitally, on my computer? So that is what I did, and this is the result! 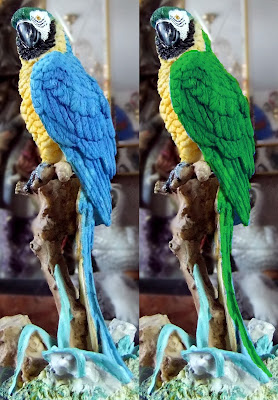 What a beautiful bird A. atwoodi must have been...always assuming of course that it did really exist to begin with!

My most sincere thanks to Rafael Silva do Nascimento for very kindly permitting me to include his beautiful macaw artwork in this ShukerNature blog post.