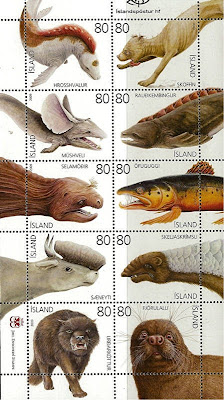 My book Dinosaurs and Other Prehistoric Animals on Stamps (CFZ Press: Bideford, 2008) contains a special appendix devoted to stamps depicting creatures of cryptozoology, including such famous examples as the yeti, bigfoot, Nessie, thylacine, Ogopogo, and all manner of sea monsters. On 19 March 2009, moreover, a new set of postage stamps with a cryptozoological and zoomythological theme was issued by Iceland, and the creatures portrayed on this mini-sheet of ten extremely attractive stamps are so unusual and hitherto-obscure that they definitely deserve some attention here.

Perhaps the best-known is the skoffin. This is usually said to be a basilisk-like entity, but is depicted on its stamp as mammalian in nature, and I have documented elsewhere in the past.

Far less familiar, however, are bizarre creatures such as the coast-inhabiting skeljaskaimsli (shell monster), which is a rusty-brown, multi-limbed animal with a tapir-like trunk and pangolin scales; a grave-robbing mystery felid called the urdarkottur or ghoul cat (more details appear in my forthcoming book Cats of Magic, Mythology, and Mystery); and the highly poisonous ofuguggi or reverse-fin trout, whose fins all turn forwards instead of back.

Completing this interesting set are three different varieties of mystery whale - the red-maned hrosshvalur (horse-whale), the raudkembingur or red-crest (both inspired perhaps by oarfishes Regalecus glesne?), and the massive-eared mushveli (mouse-whale); the sheep-molesting, shore-dwelling fjorulalli or beachwalker, portrayed as being very seal-like in its stamp; the huge selamodir (seal mother), which protects normal-sized seals if they are threatened but appears less seal-like in its stamp; and the amphibious saeneyti (sea cattle) that sometimes mingle with true cattle.

A useful new book, Meeting With Monsters, which documents many of these curious Icelandic crypto-beasts, and is available in English and Icelandic, can be ordered from Postphil Iceland. For further details, check out the following link: 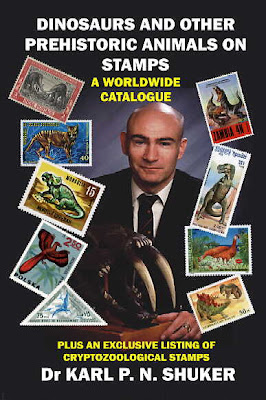 My catalogue of dinosaur and other prehistoric animals on stamps also contains a special appendix devoted to stamps depicting current and former cryptids
Posted by Dr Karl Shuker at 19:21