In a previous ShukerNature blog article (click here), I reminisced about my lifelong ambition (finally fulfilled after 48 years of ongoing frustration!) to see the bird above all others that had bewitched me from my earliest days – that cerise-plumed, butterfly-winged wonder known as the hoopoe, which is a rare but annual visitor to Great Britain.

So too is another species – one that to me is the hoopoe of the moth world, because the thought of seeing this spectacular creature one day fills me with just as much enthusiasm and passion as I felt for so long and so earnestly in relation to the hoopoe. Yet whereas the latter is finally on my list of observed species, its equally charismatic lepidopteran counterpart remains resolutely unseen, still unencountered by me more than 54 years on from when I made my debut on the planet that I share with it. 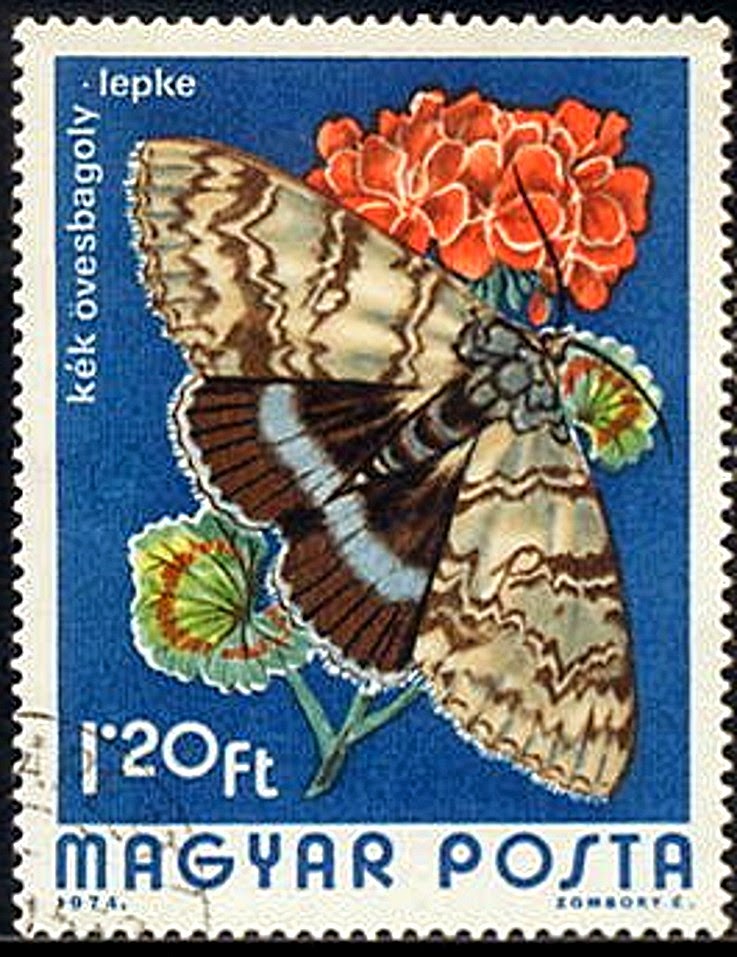 So what is this peerless, unparalleled species? None other than the fittingly-named clifden nonpareil Catocala fraxini ('nonpareil' translates from the French as 'without equal'). One of Britain's largest species of moth, it is also known, again appropriately albeit somewhat less romantically, as the blue underwing.

Indeed, so noteworthy is this moth's appearance that it even attracted the attention of eminent Russian novelist Vladimir Nabokov. Well known for his passion for Lepidoptera, he immortalised the clifden nonpareil in his novel The Gift (1938, English translation 1963): "Your blue stripe, Catocalid, shows from under its gray lid".

This celebrated species belongs to the taxonomic family Noctuidae, the owlet moths, which is the largest family of moths, is of worldwide distribution, and contains over 35,000 species. Within this family is the genus Catocala, containing over 250 species, native to Eurasia and North America, which are popularly termed underwings or underwing moths (Catocala is Greek for 'beautiful hind ones'). This name refers to the usually bright stripes of colour present on the upper side of their hindwings. At rest, an underwing moth's hindwings are concealed beneath its larger but very drab, grey-brown, cryptically-patterned forewings, allowing it to remain hidden from predators when resting in the open on the trunks of trees, etc. Should its presence be detected, however, in order to startle the predator momentarily and thus provide valuable escape time the moth will flash its brightly-coloured hindwings, abruptly revealing their colours. Due to the semi-circular shape of the stripes, moreover, it has been speculated that they may look like owl eyes to smaller birds, which would therefore frighten them away, saving the moth.

These stripes occur in a wide range of colours, varying between species, and many Catocala species are named accordingly. Thus there are red underwings, crimson underwings, rosy underwings, scarlet underwings, pink underwings, and so forth. Moreover, certain members of related genera that possess comparable hindwings are also referred to as underwings, such as the copper underwings Amphipyra spp., yellow underwings Noctua spp., and the brown underwing Minucia lunaris. In addition, there are two species of orange underwing Archlearis spp., but these belong to a separate taxonomic family, Geometridae.

A red underwing Catocala nupta (top) and a clifden nonpareil (bottom), pictured in The Natural History of British Moths (1836), by J. Duncan

Yet despite the difference in specific colours, these many species' hindwing stripes all occur in the red portion of the colour spectrum – all except the stripes of one very singular, special species, that is. Lone among all underwings, the stripes of the clifden nonpareil are blue, and not just some nondescript grey-blue shade either, but instead a bright, truly spectacular blue, which must be genuinely dazzling if suddenly flashed in the face of an inquisitive, too-close-for-comfort avian observer.

Blue has always been far and away my all-time favourite colour – so much so in fact that I sometimes wonder whether my wardrobe would have been so plentifully packed with Levis and other jeans, not to mention trucker jackets and shirts, had the predominant dye for denim been anything other than blue! Hence it was inevitable that a blue underwing – and especially when it is the only blue underwing – would attract my enduring interest and attention once I'd learnt of such an exotic creature's existence, and thus has it proved.

Moreover, boasting a 4-inch wingspan the clifden nonpareil is set apart from all other underwings not only by its blue hindwing stripes but also by its very large size – indeed, it is the world's largest species of Catocala underwing. It was scientifically named by none other than Linnaeus, in 1758, who dubbed it Phalaena fraxini (noting its sometime occurrence on ash trees, Fraxinus spp.) but it was subsequently rehoused in the genus Catocala after the latter was coined in 1802 by German entomologist Franz von Paula Schrank. It has a wide Old World distribution, being found as a resident in deciduous woodlands (especially near water) of northern and central Europe (and as a migrant in eastern and southern Europe), as well as in northern Asia, and in temperate eastern Asia as far as Japan. However, it is its famed rarity in Britain that has earned it its reputation as a near-legendary species - one that was prized above all others by moth collectors during the Victorian era.

The first published reference to the clifden nonpareil's occurrence in Britain was by Benjamin Wilkes in his book The English Moths and Butterflies (1749), in which he recorded a specimen lately collected by a Mr Davenport on an ash tree near Clifden (now known as Cliveden) in Buckinghamshire – the location which, together with its unrivalled beauty, earned this species its common name. However, it had been known in Britain since at least 1740 – the year in which a specimen now in the Dale Collection within Oxford's Hope Museum was collected in Dorset. Since then, usually single specimens have been reported in a number of English counties spasmodically up until the 1940s and 1950s, during which period sightings increased as its range temporarily expanded due to favourable climatic conditions, even giving brief hope that this evanescent species had permanently established itself as a resident in Kent and the Norfolk Broads. Sadly, however, that hope was not fulfilled, because sightings fell again following the return of less favourable climate by the early 1960s, and it once more became merely an irregular immigrant.

Favouring the aspen as its larval foodplant (though also selecting other poplar species if aspen are not present, and sometimes found on ash trees too), the clifden nonpareil is most commonly sighted in September, particularly in southern and southeastern England. In recent years, however, there have been well-publicised records from the Westcountry counties too (one specimen turned up at Cornwall's Lost Gardens of Heligan in autumn 2010), and there is even a faint possibility that small colonies are establishing themselves in Suffolk. The recolonisation of southern England by this exquisite species would be a wonderful occurrence, so we can but hope that prevailing climatic conditions continue to encourage this most welcome trend. And who knows – if this does occur, one day the clifden nonpareil might expand its range even further, taking in my home county of the West Midlands. In 1872, there was a record from the neighbouring county of Shropshire, plus there are several 19th-Century records from northern England, and even Scotland and Ireland too, so it was clearly not a confirmed southerner back then.

What a marvellous, magical experience it would be if, finally, some day in the not-too-distant future I could encounter a large grey moth that suddenly flashed its hindwings at me to reveal a dazzling stripe of bright blue. For me, such an event would definitely be peerless, truly unparalleled – just like the clifden nonpareil itself.