In my previous ShukerNature blog article (click here), I documented a remarkable drawing by the late artist Jean Claude Thibault, a Frenchman resident for many years in the Central African Republic (CAR). It depicts what appears to be the mysterious emela-ntouka or 'killer of elephants' – a horned aquatic cryptid also reported elsewhere in Africa under such names as the chipekwe and irizima. 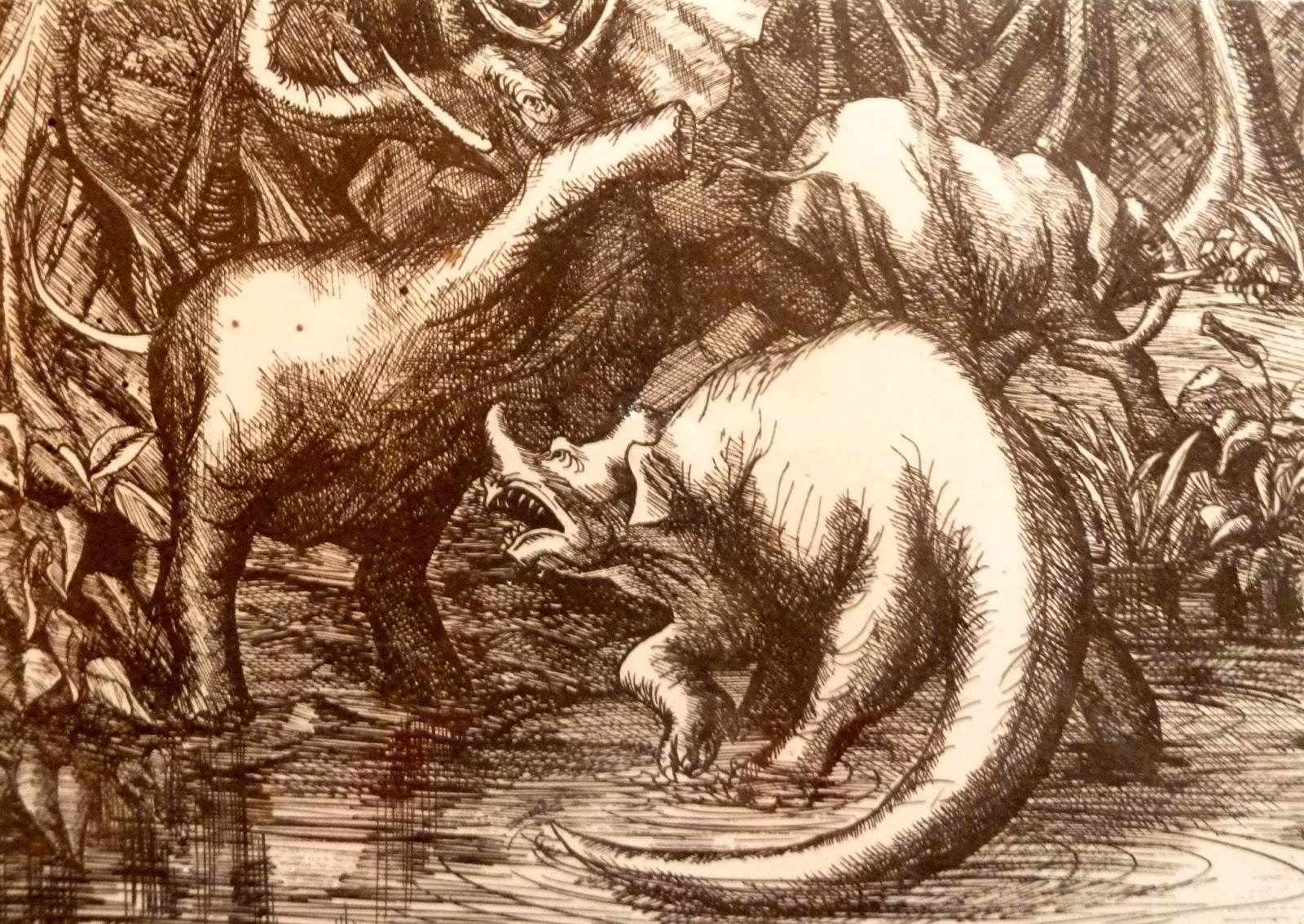 Moreover, this was just one of four pictures depicting intriguing CAR entities that had been drawn by Thibault (sometime during the early 1990s or late 1980s), and which were shown to me in August 2012 by Anette Stichnoth. She was working at that time for the Dzanga-Sangha Protected Areas (APDS) – a region of especial conservation significance in the CAR (check out its website here). The drawings had lately been displayed in an art exhibition held by the APDS, not long after Thibault had died (about three years ago), and Anette was enquiring about the entities illustrated in them. A year later, she received some illuminating information concerning these entities from a CAR local who was very knowledgeable about his country's traditional lore and legends.

So now, with Anette's kind permission, this present ShukerNature blog article exclusively unveils Thibault's three other drawings online, accompanied by the information that she received concerning them, together with my own thoughts.

Above is the first of these drawings. It depicts a truly bizarre entity known as the mondjoli-mbembe or, more simply, the fish-man. According to Anette's CAR informant, this bird-headed humanoid is a paranormal being that lives in marshes and swamps, feeding upon fishes, from which he obtains his mystical powers that enable him to vanish from one place and appear instantly somewhere else. Sometimes, moreover, he makes fishermen disappear who want to fish in the watery terrain that he inhabits. When he kills fishes, he leaves them in a heap, and if a fisherman should find that heap the mondjoli-mbembe has no objection to the man taking half of the fishes away. But he must not take all of them – otherwise the angry mondjoli-mbembe will follow him to his village and take his revenge, which is not a pleasant sight to behold!

Red river hogs, with one of them ridden by a pig genie (© Jean-Claude Thibault)

This second drawing by Thibault depicts a hairy bipedal humanoid entity of diminutive stature riding a species of central and western African wild pig known as the red river hog or bush pig Potamochoerus porcus (not to be confused with the closely-related and similarly-named but less visually-colourful bushpig P. larvatus of eastern and southern Africa). According to Anette's CAR informant, such entities as this individual are supernatural dwarf beings known as pig genii or pig ghosts, which act as pig-herds to the red river hogs, walking in front of them in the forest, and even riding on their backs. Moreover, should a hog refuse to allow one of these beings to ride it, the pig genie will punish it, and chase it away from the other hogs towards the traps set by human hunters.

The third Thibault drawing presented here also depicts pig genii, but this time they are about to take part alongside some humans in a ritual known as boyebe. Before human hunters set out on a foray, they supposedly perform boyebe, which consists of dancing around a fire with the pig genii, because the men believe that this will ensure that they achieve success in their hunting.

There seems little doubt that the mondjoli-mbembe is entirely mythical, a grotesque, composite bird-man equipped with magical powers and confined exclusively to the CAR's corpus of traditional folklore. Conversely, the pig genii are very similar indeed in basic form to a number of dwarf hairy bipedal man-beasts of possible hominoid identity reported widely across tropical Africa. These include such cryptozoologically familiar forms as the agogwe of Tanzania and Mozambique, the fating 'ho of Senegal, the Congolese kakundakari, and the séhité of the Ivory Coast.

According to veteran cryptozoologist Dr Bernard Heuvelmans, who devoted a major section to them in his book Les Bêtes Humaines d'Afrique (1980), these primate cryptids could variously be surviving gracile australopithecines (early bipedal African hominids known to have existed from 3.9 million to 1.7 million years ago), proto-pygmies, and/or proto-bushmen. Other suggestions include chimpanzees Pan troglodytes that have become more bipedal than is typical for their species, or bonobos P. paniscus – which walk upright quite commonly anyway. Some of these entities are deemed by their superstitious human neighbours to be preternatural, but descriptions of them given by Western eyewitnesses suggest otherwise – that they are corporeal yet highly elusive, currently-unclassified hominoids, exactly as proposed by Heuvelmans.

The CAR pig genii may well fall into this category too, with their pig-riding, pig-herding proclivities and their fire-dancing, pre-hunting rituals alongside humans owing rather more to native imagination than to ethnological interaction. Interestingly, according to traditional lore in Brazil a short hairy man-beast inhabiting its jungles and called the curupira (click here to see a painting depicting it) is said to ride those wild pig-like ungulates known as peccaries and even small deer called brockets or mazamas. So such folklore motifs are clearly not confined to Africa.

If any ShukerNature reader has additional information concerning the CAR entities depicted in Thibault's drawings, I'd welcome any details that you could send me or post here – thanks very much!

Restoration of Australopithecus africanus, a species of gracile australopithecine that existed from around 3.03 million to 2.04 million years ago (© Nachosan/Wikipedia)