A MYSTERY MOTH FROM FAIRYLAND?

Occasionally, a mystery animal report so strange and singular comes to light that it defies any serious attempt at explanation.

One such example was forwarded on 26 May 1998 to what later became the cz@yahoogroups.com cryptozoology discussion group (now defunct) by its founder, American cryptozoologist Chad Arment. He had received it from a Tennessee correspondent, and it reads as follows:

"The insect that I saw was humming a song. I was on top of a hill and thought that I was hearing a radio or something like that but I noticed this little bug [and] the closer it got the more like a song it became. This little bug was flying upright like a ...fairy! I was really excited because I thought what I saw was what people in earlier times might have mistaken for real sprites. This bug went from tree to tree and from flower to flower stopping at each one. I didn't see it eat anything but like I said I was excited. It was about 2" long "tall" and white[,] had blue eyes large almond shaped and long antennae that hung like hair. It was really quite intriguing but as I moved to get a better look it saw me and went horizontal and was off like a shot.  Also the humming stopped when it saw me and it just buzzed away."

Could it have been a hummingbird, rather than an insect? Tennessee has records of seven different hummingbird species, of which one (the ruby-throated hummingbird Archilochus colubris) breeds here and a second (the rufous hummingbird Selasphorus rufus) is a regular visitor. Apart from rare albino and leucistic specimens, however, hummingbirds are not white, nor do they possess almond-shaped eyes and/or antennae, and anyone living in an area where they are common is unlikely to mistake them for insects, especially as hummingbirds are such familiar birds in those areas.

Conversely, after reading through this extraordinary report, images of hawk moths (aka sphinx moths in the Americas) readily come to mind, in particular something along the lines of the hummingbird hawk moth Macroglossum stellatarum – named after its famously deceptive outward and behavioural similarity to a bona fide hummingbird. Having said that, this insect is an exclusively Old World species, but might there perhaps be an undiscovered New World representative?

More plausible is that it was a specimen of what is commonly termed a hummingbird hawk moth in the Americas but known in the Old World as a bee hawk moth. Four species belonging to the genus Hemaris are known from North and South America.

Day-flying, they do resemble hummingbirds, but with transparent wings (earning them the alternative name of clearwing moths) that make them look somewhat ethereal too. Moreover, I have seen photos of these fascinating little insects in which their shiny compound eyes appear blue in colour, and at least two species, the snowberry clearwing Hemaris diffinis and common clearwing H. thysbe, are indeed native to Tennessee. Many thanks also to Indian naturalist Javed Ahmed for bringing to my attention an online page (click here) of photos of American moths that depict these latter two species in many in-flight poses, including vertical ones corresponding to the Tennessee eyewitness's above-quoted description of the mystery moth.

Sadly, however, with only a single report on file, there seems little chance of ever obtaining a conclusive identification for Tennessee's entomological fairy (for my ShukerNature investigation of another enigmatic lepidopteran - the Venezuelan poodle moth - click here). 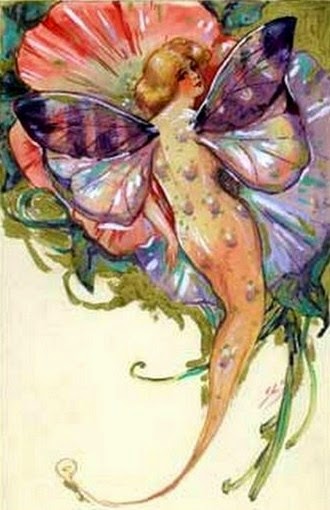