GROUSING ABOUT THE RACKELHAHN – A SPECTACULARLY CROSS-TEMPERED CROSSBREED OF THE FEATHERED VARIETY! 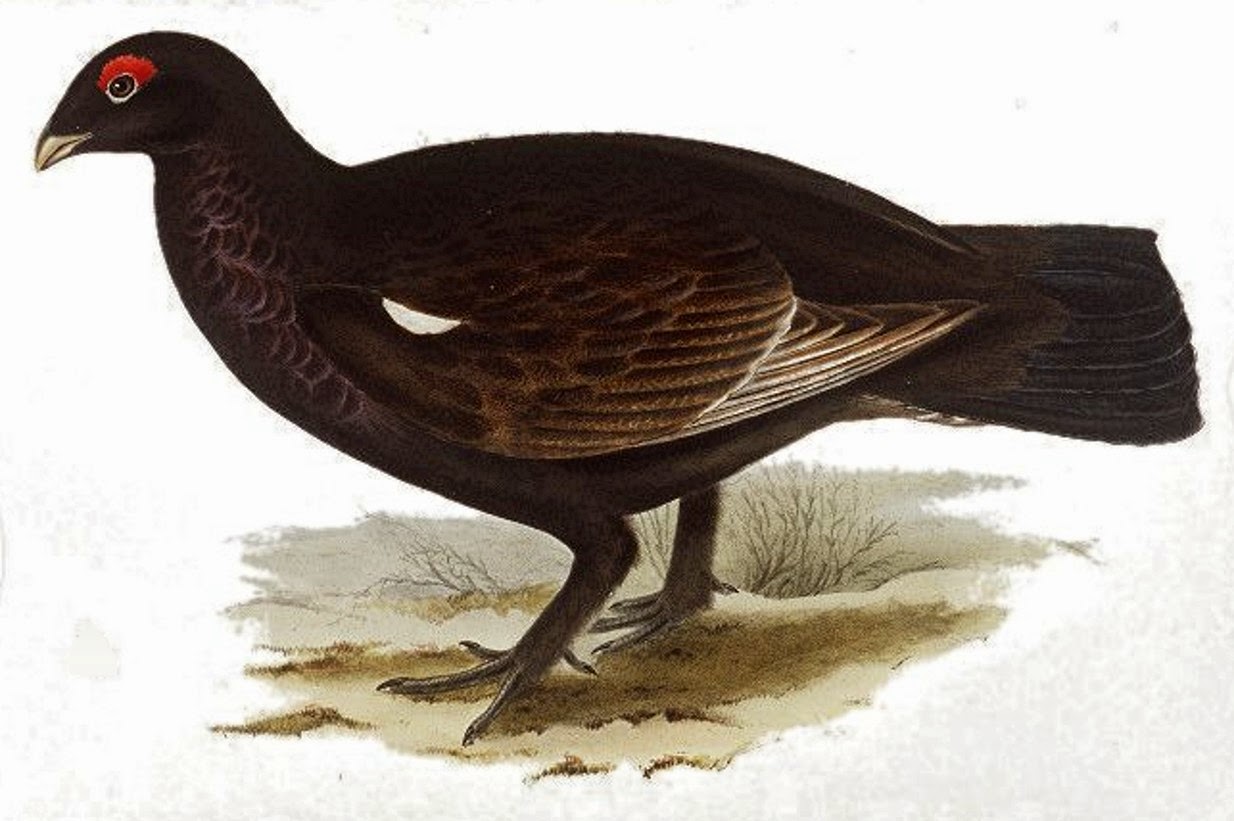 19th-Century painting of a male rackelhahn

Whereas mammals on the whole are somewhat conservative as far as interspecific matings in the wild are concerned (all manner of exotic mammalian hybrids have of course been produced by deliberate captive breeding), birds show far less restraint in such matters, yielding all manner of spectacular crossbred creations. Some of these are famous, some are controversial, but all embody a fascinating montage of mixed morphology, yielding curious combinations of features drawn from both of their parental species so that they are at once similar to yet dissimilar from each of them.

One of my favourite examples of an interspecific avian hybrid (indeed, an intergeneric one if its two progenitor species are retained in the separate genera that they were long accorded before more recently being lumped back together within the same single genus) is not particularly well known outside gamebird hunting circles. Yet it is very distinctive in form as well as being quite large (and hence conspicuous) in size, and often uncompromisingly bellicose in behaviour too. Consequently, I felt that it was high time that this noteworthy bird receive some publicity here on ShukerNature. And so, without further ado, I give you…the rackelhahn. 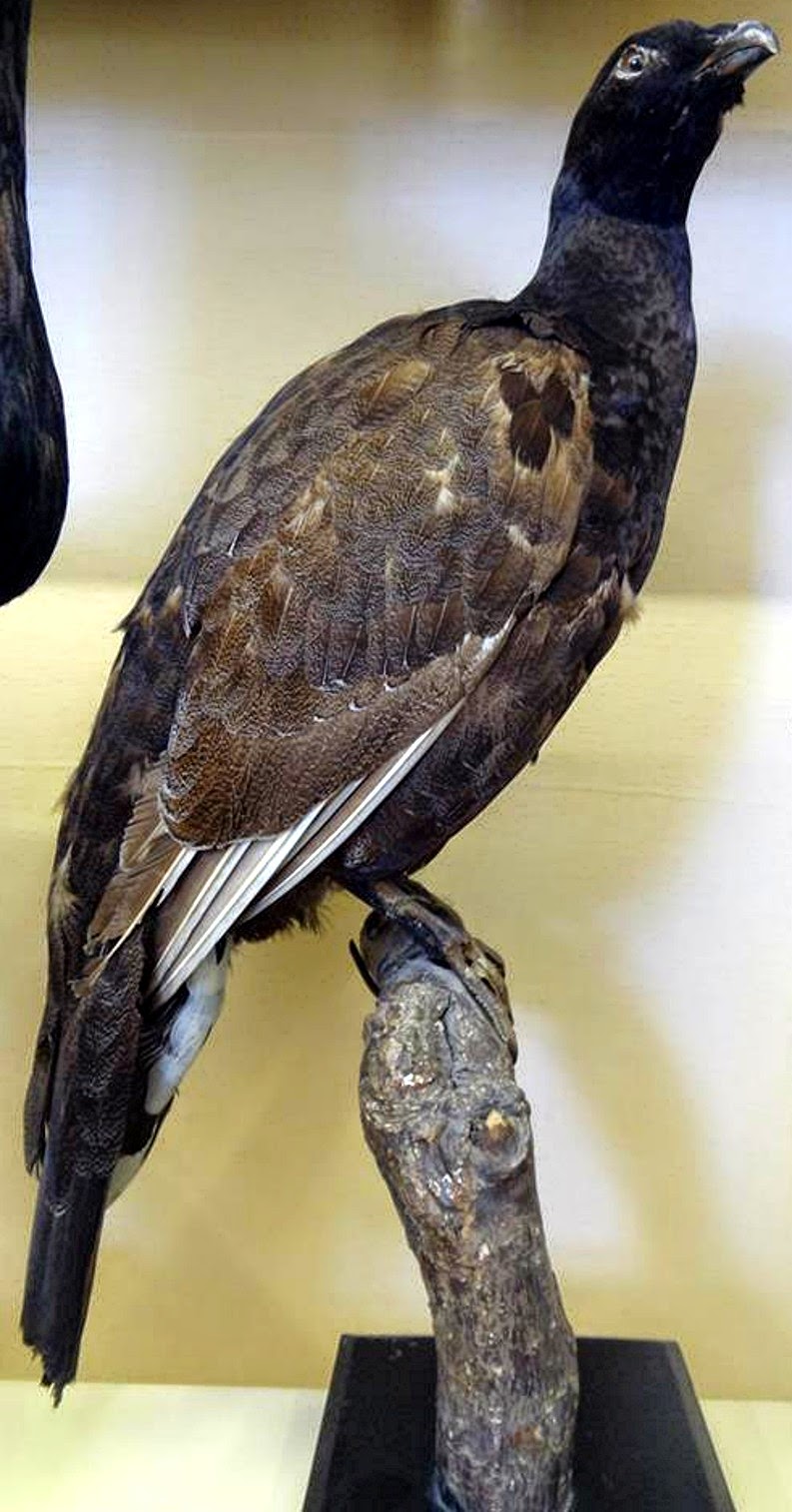 Also known as the rackelhane or rackelwild (all three names are apparently of Swedish origin, derived from the word 'rachla' - meaning 'snoring' or 'wheezing' - and refer to the curious pig-like grunting sounds that it is wont to give voice to in addition to combinations of the calls of both parental species), this interesting interspecific results from matings between two very readily-distinguishable species of grouse.

These are the Western capercaillie Tetrao urogallus and the Eurasian black grouse T. (=Lyrurus) tetrix, both of which occur across much of Europe and yield this hybrid throughout the zones of overlap within their respective distribution ranges, especially in Scandinavia. Having said that: because their ranges have become rather fragmented in modern times due to over-hunting, however, these overlap zones have diminished, and rackelhahn occurrence has decreased accordingly. Hence it is much rarer now than was once the case. 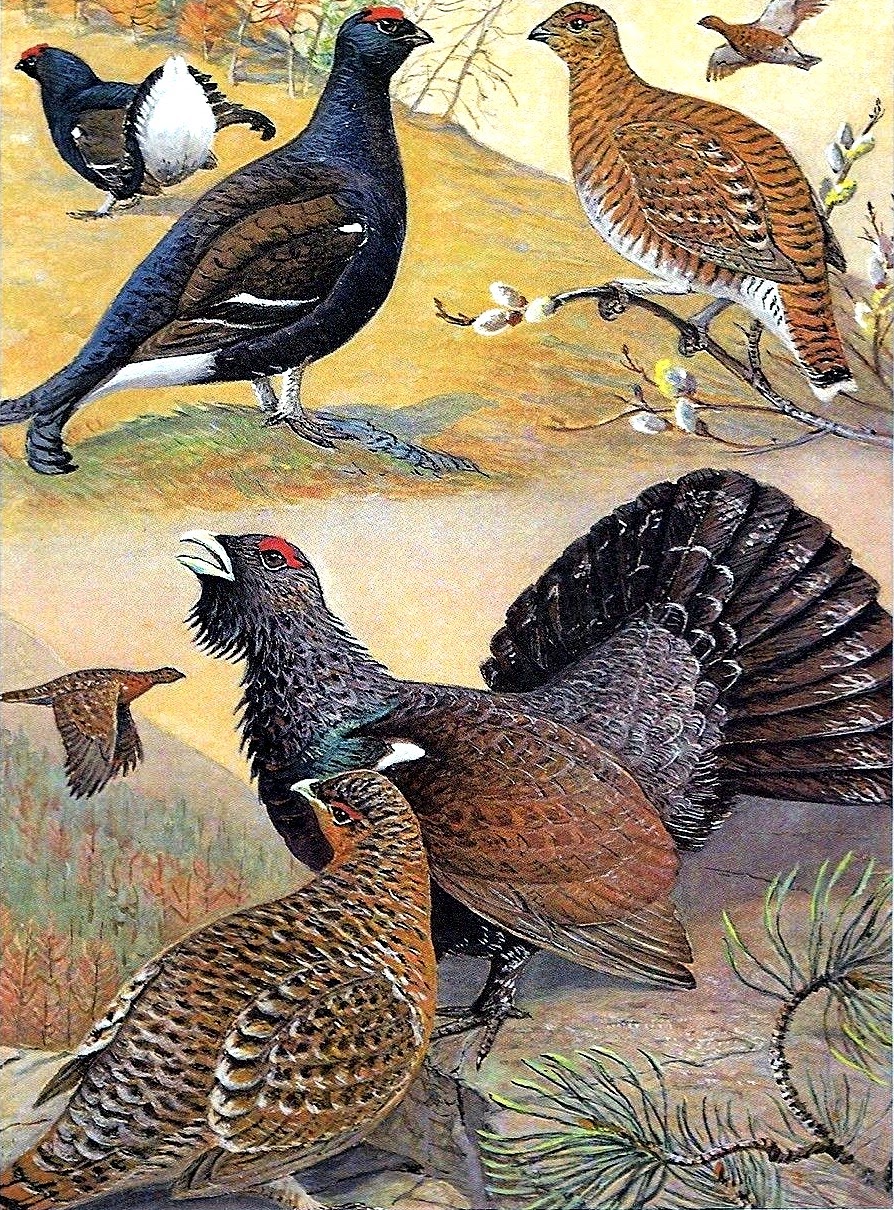 Bearing in mind that the male capercaillie is considerably larger than the female black grouse, thereby making matings between them both difficult and unlikely, most rackelhahn specimens result from the reverse cross, i.e. between male black grouse and female capercaillies. Rackelhahn specimens also occur in regions where the distribution range of the Eurasian black grouse overlaps with that of the black-billed capercaillie T. urogalloides (native to eastern Russia as well as parts of northern Mongolia and China). 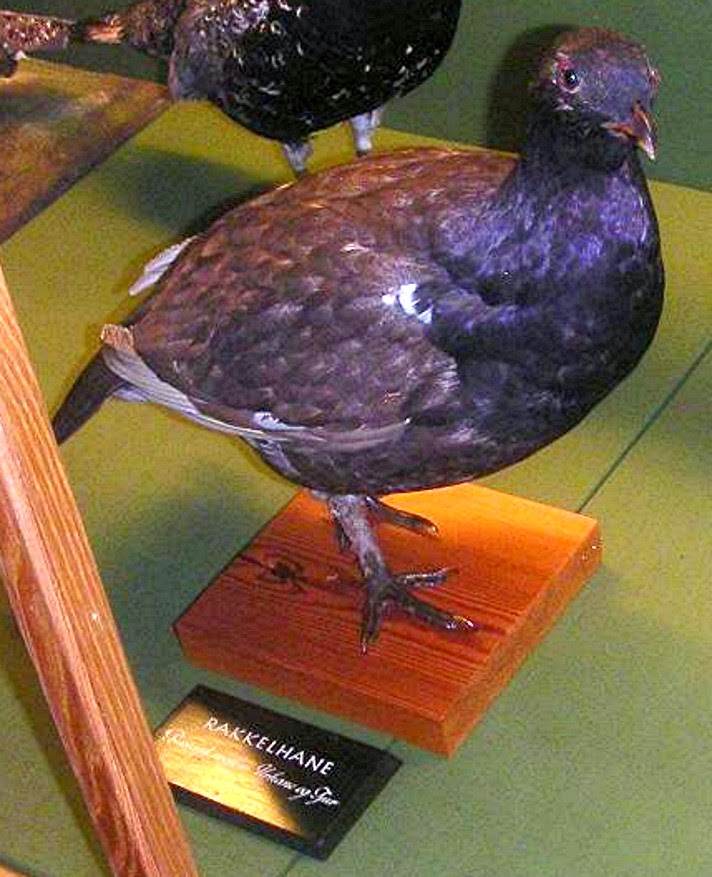 Although long known to European naturalists (it was listed by Linnaeus back in 1758 when he was compiling his binomial system of nomenclature for plant and animal species), the rackelhahn was deemed by some to be a valid species rather than a hybrid, and thus received various binomial names, including Tetrao medius and T. hybridus (though as can be seen, such names clearly reflected the prevailing thought that it represented a form intermediate between the capercaillie and black grouse), but these were soon abandoned when its true, hybrid nature was confirmed by observations of successful matings in the wild between the two species. 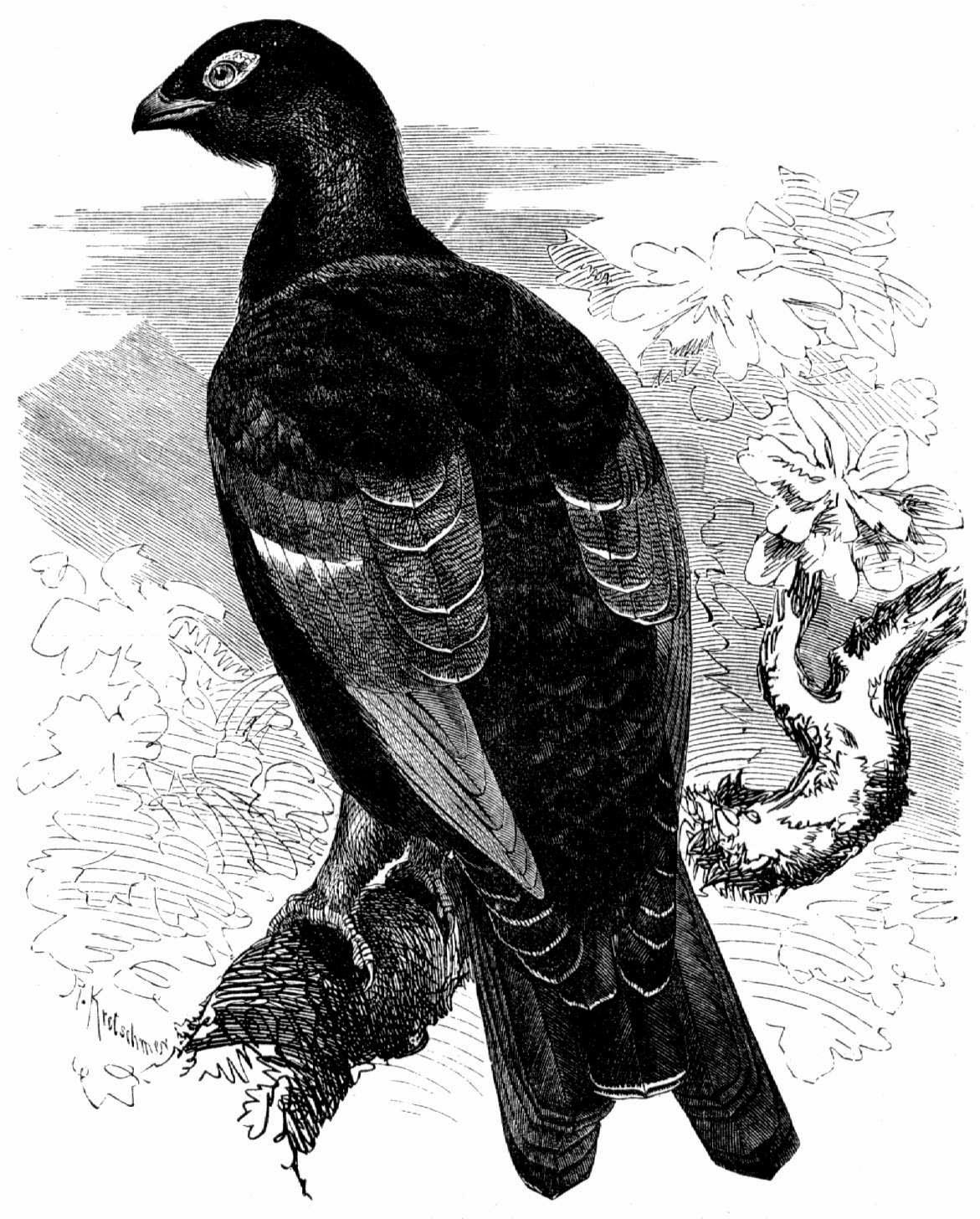 Male rackelhahn specimens are much more common than females, but both sexes are apparently eager to mate. The first comprehensive description of the male rackelhahn's form was produced by Adolf Bernhard Meyer, who in 1824 also became the first person to describe the female rackelhahn's form – prior to then, there had only been unconfirmed speculations concerning the latter's appearance. Having said that, however, just like many other interspecific hybrids there is some degree of morphological variation between individual rackelhahn specimens, but in general terms they can be described as follows:

The male is intermediate in size between the larger male capercaillie and the smaller male black grouse, and is mostly dark in colour, with brownish-black shoulders and wings, plus deep metallic blue-purple to copper-red sheens upon its head, its chest, the front of its neck, and sometimes the start of its back too. As in both parental species, it has a white spot upon each shoulder, and some specimens also have white spots upon the upper surface of their tail feathers and/or white tips to their tail feathers' underside. Its eyes' irises are brown, its eyebrow-wattles are bright red, and its beak is blackish-horn in colour. The terminal edge of its tail is semicircular, but sometimes has pronounced curving edges, reminiscent of the male black grouse's famously lyrate tail. 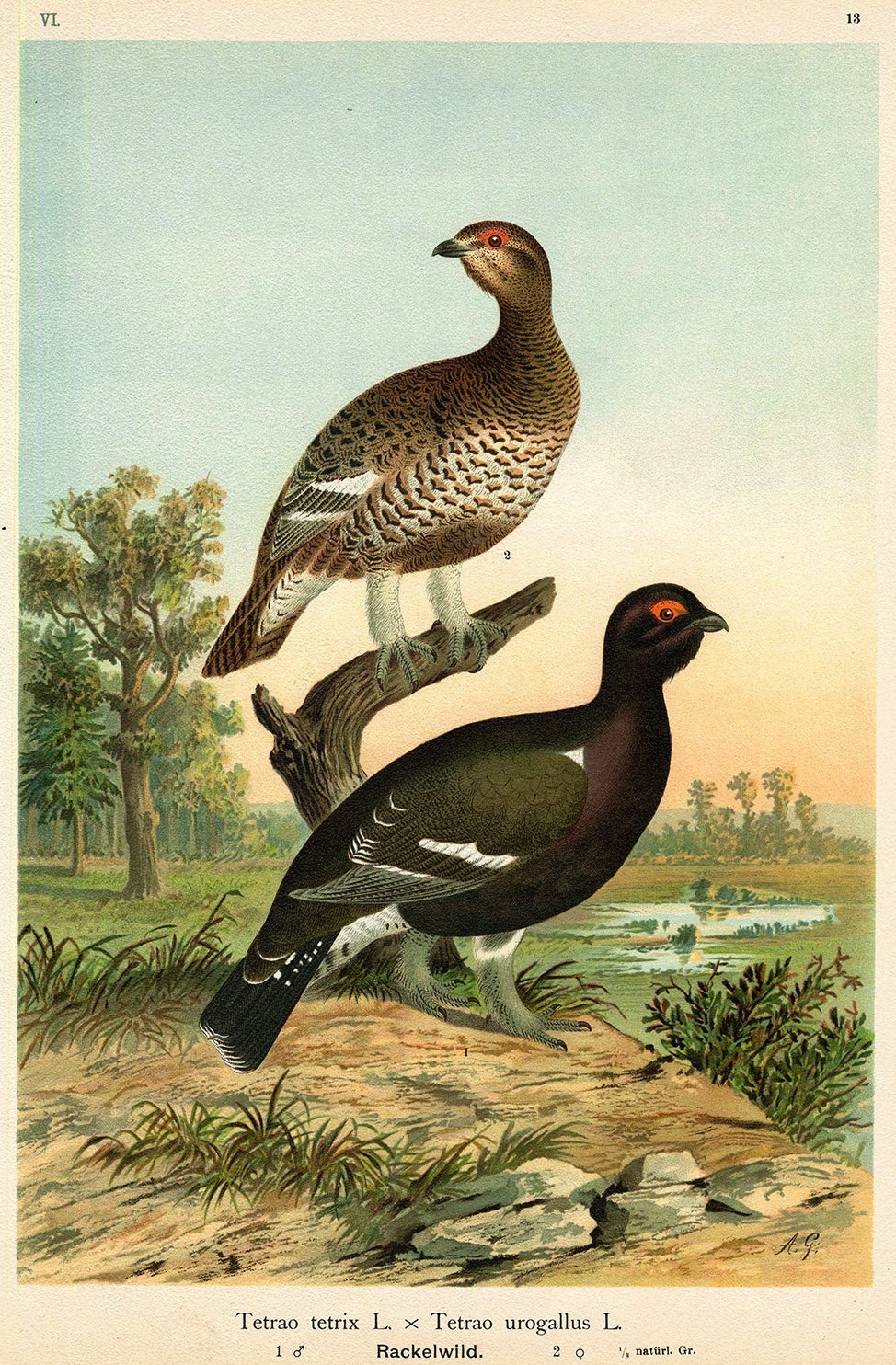 Like the male, the female rackelhahn is intermediate in size between the larger female capercaillie and the smaller female black grouse, and can be readily distinguished from both via its blackish-brown plumage, sprinkled with brown, grey, and rust-red. The tail of some specimens has a relatively straight terminal edge like a female capercaillie's tail, whereas in others it is lyrate, like that of a female black grouse. 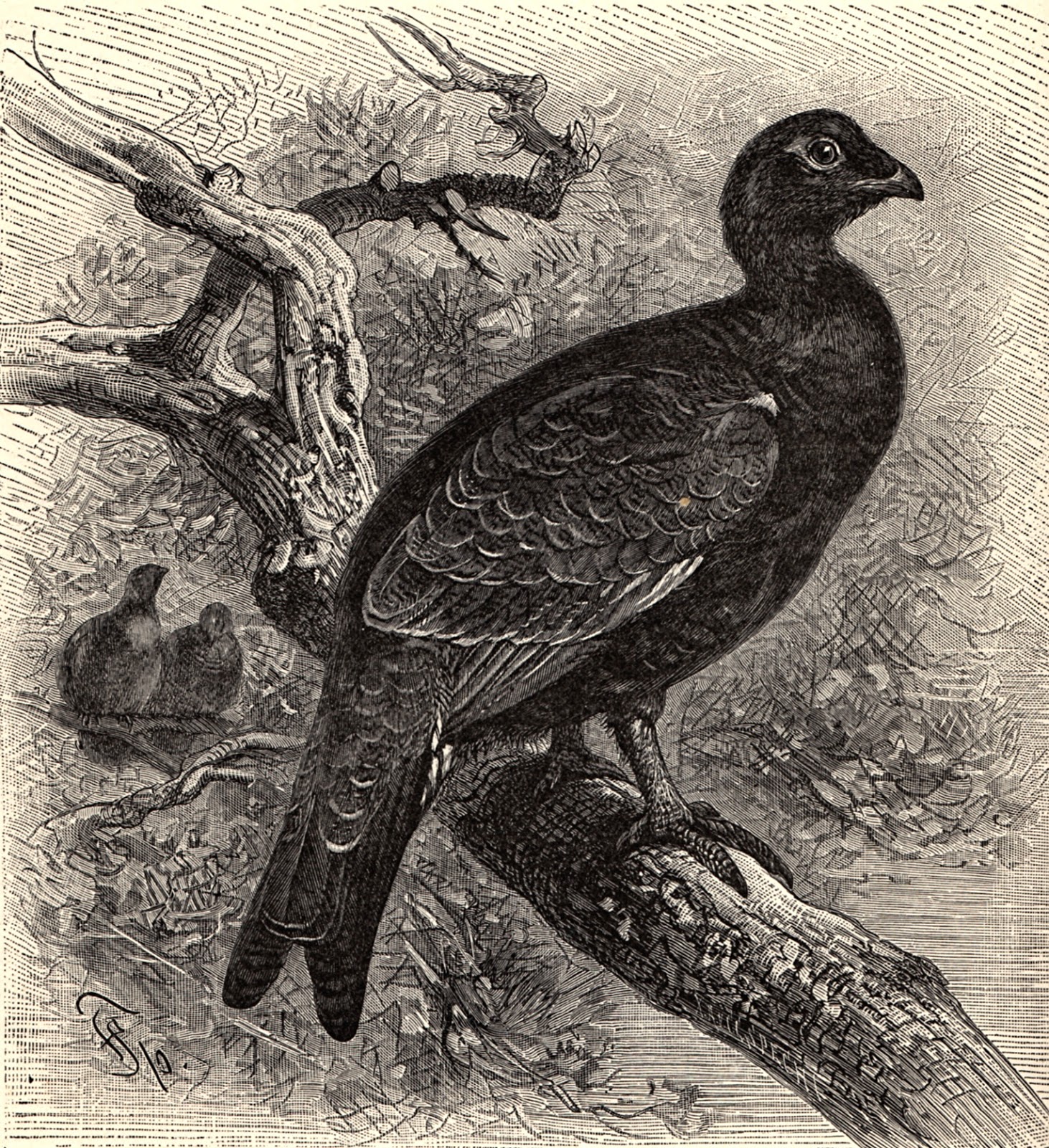 Conversely, rackelhahn males do sometimes invade black grouse leks, and due to their much larger size and aggressive temperament they have been known to disperse these leks by intimidating and directly attacking, even occasionally killing, some of the male grouse there. They will also kill female black grouse, especially if the latter are indifferent to their advances, showing no inclination to mate with them. Having said that, there are also reports on file of rackelhahn males that have been frightened away by smaller but belligerent male black grouse, so the rackelhahn does not always triumph in such confrontations. Rackelhahn females that have mated with male black grouse have laid eggs, but the hatching of viable offspring from them does not seem to have been confirmed. 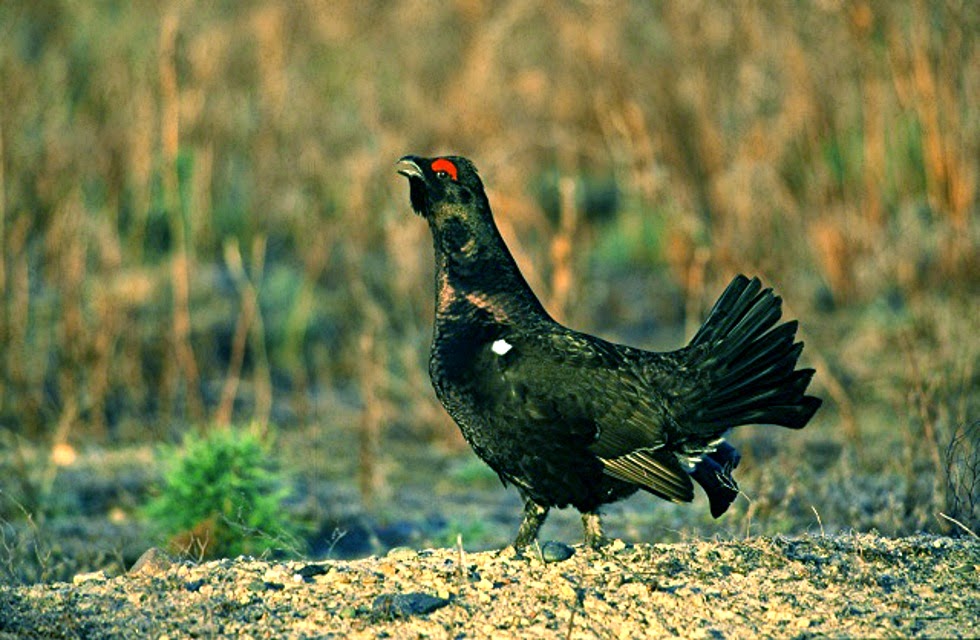 An even more pugnacious male rackelhahn can be viewed here fearlessly attacking a hapless cameraman gamely attempting to photograph it!

And here three male rackelhahn specimens can be seen fighting each other in a black grouse lek at Landvik, Grimstad, Norway, on 1 May 1994; a week earlier, this lek had also been visited by a single female capercaillie 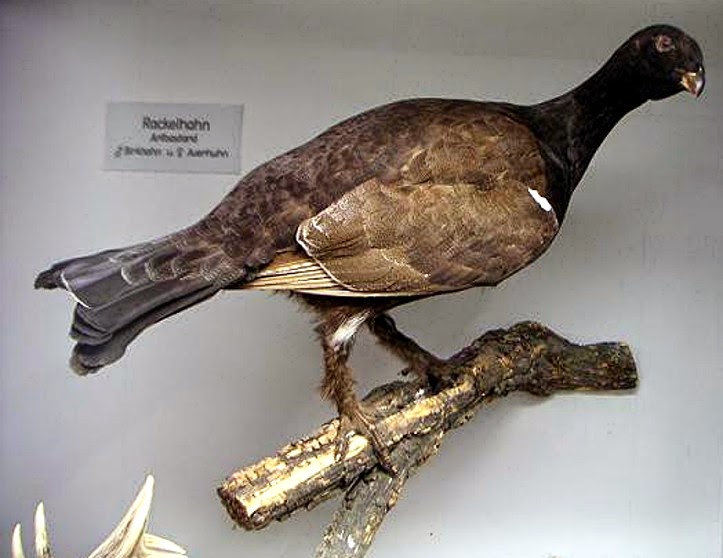 Male rackelhahn, taxiderm specimen at the Zoological Institute of the University of Tübingen, Germany (© Markus Bühler)

It has sometimes been said that love is a battleground, and this is certainly true as far as warring, cross-tempered rackelhahn males are concerned! 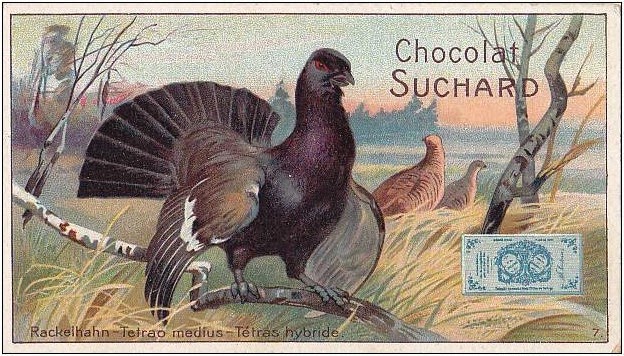 
Incidentally, the rackelhahn should not be confused with another unusual grouse hybrid, the riporre - which is a hybrid of the Eurasian black grouse and the willow grouse Lagopus lagopus. Here are two riporre specimens from northern Sweden that were documented in 1904 by Dr Einar Lönnberg and had resulted from a successful mating between a male willow grouse and a female black grouse: 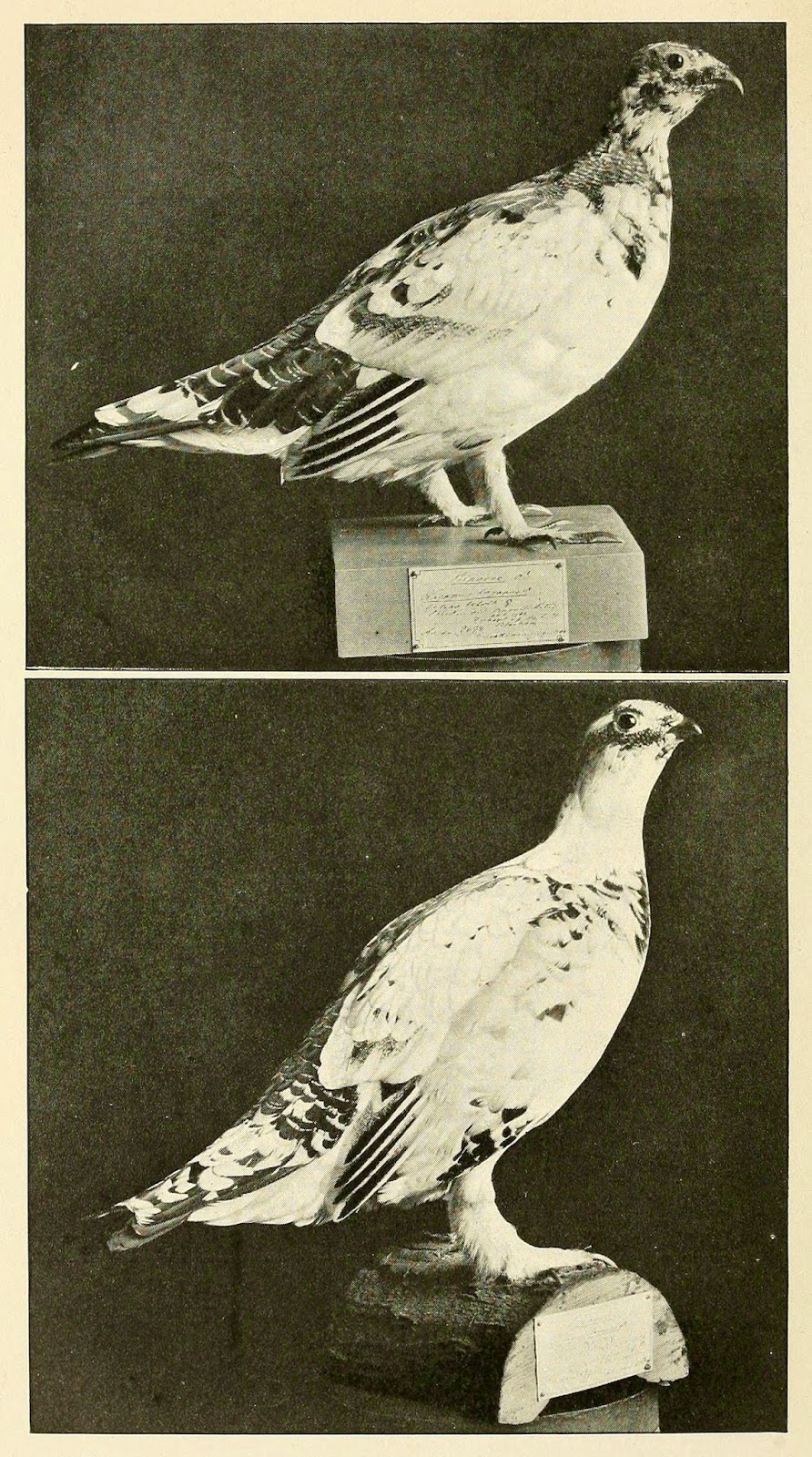