OGLING THE OGRIDGE, OUTDOORS AND ONLINE - IDENTIFYING A LONGSTANDING MYSTERY BIRD OF MINE 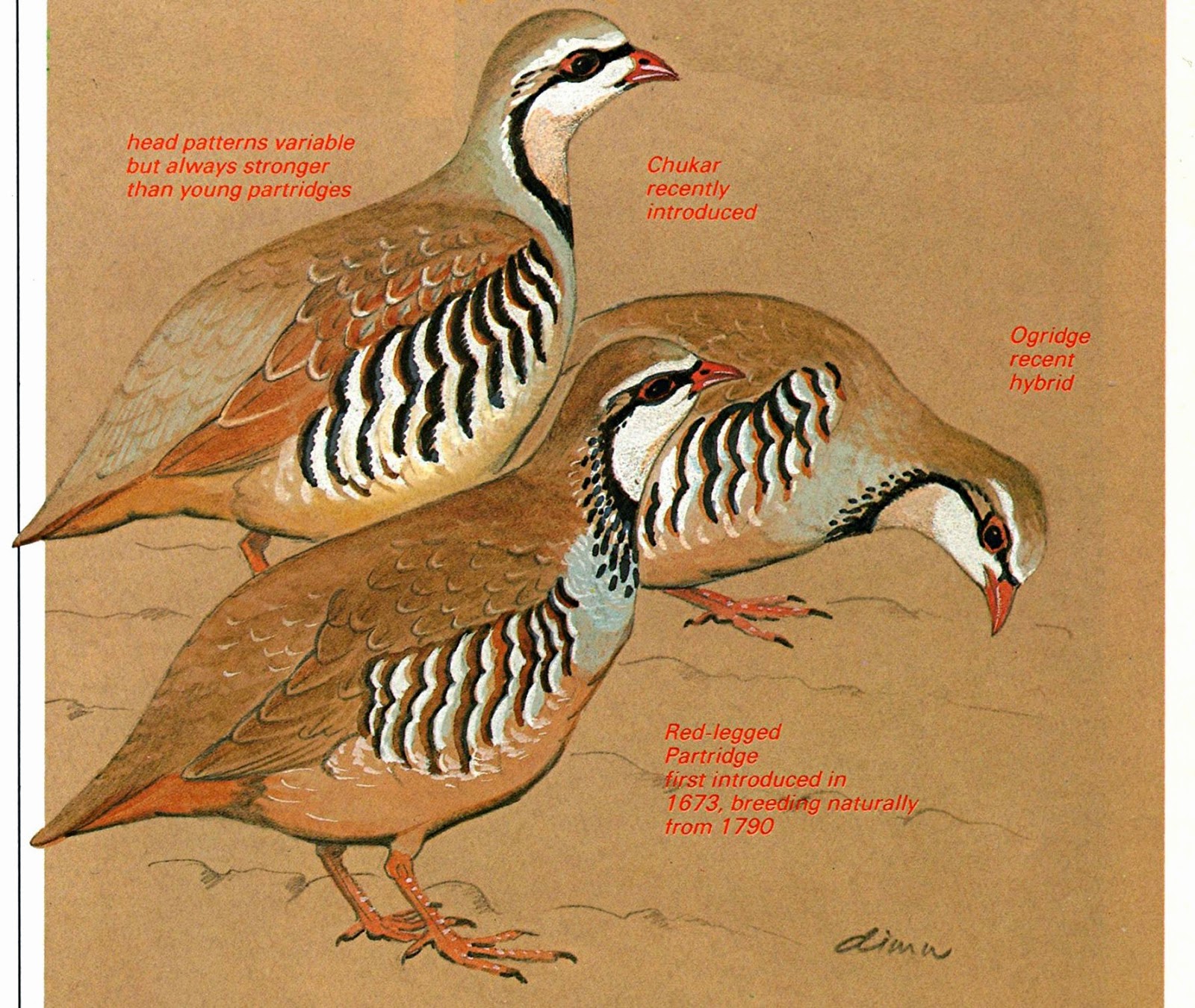 As I've mentioned elsewhere on ShukerNature, even as a child I enjoyed cutting out and saving newspaper articles reporting unusual or controversial animals. Pasted in a series of scrapbooks, these humble offerings were the foundation of what gradually expanded during subsequent years into what is now my personal and still-expanding archive of material on cryptozoology and animal anomalies.

One of these early documents was a short newspaper report concerning a supposedly new type of bird dubbed the ogridge. Back in those very early, formative years as a budding cryptozoological archivist, however, my youthful zeal for saving such reports was not always matched by my remembering to note their complete bibliographical details. And so it was with this particular cutting: I'd noted down that it had appeared on 16 November 1972, but I'd neglected to record the name of the newspaper that had published it. However, I do recall that the newspaper in question was one of two London-based red-top tabloids – either the Sun or the Daily Mirror. So if I ever do need a full reference for it, this shouldn't be too difficult to track down.

Anyway, the report itself reads as follows:

New birds are rare these days but one new bird is the ogridge. The ogridge is bred from the partridge but its markings are a lot bigger and bolder. It is gentle, unlike a mere partridge which pecks other birds to death out of sheer boredom. And, to top it all, the ogridge is a much better sport. Partridges walk away from the gun. The ogridge knows better – it flies. The ogridge has been bred by Lincolnshire game breeders, Ormsby Games. They said yesterday that it is in great demand, with day-old chicks selling at 80p. After all, ogridges may be harder to shoot, but they're easier to live with.

Obviously, the notion of a new bird greatly intrigued me, and in the years that followed I sought to discover more about this avian novelty, seeking references to it in books, journals, library archives, etc, but all to no avail. Not a mention of the ogridge could be found by me anywhere (this was of course back in those grim, dark years before the instantly-available plethora of online information proffered by the internet existed!). So recalcitrantly elusive was the enigmatic ogridge, coupled by the somewhat whimsical, tongue-in-cheek write-up of the lone newspaper report on it that I had preserved back in 1972, that I eventually began to wonder if it was nothing more than a journalistic joke, created to amuse its readers but not to be taken seriously.

It was now the late 1980s, and one day I was browsing through some books in a local charity shop when I noticed a pile of magazines nearby. Idly flicking through them, I came upon a few issues of Bird Watching. Knowing that this magazine often carries reports and articles concerning rarities sighted in Britain or elsewhere, I started looking through them. One was the February 1988 issue, and as I thumbed through its pages I came upon an article by Ian Wallace entitled 'Whirring Wings and Cackles', whose subject was partridges in Britain. And there, in a full-colour plate depicting the various types of partridge on record from the U.K., was a portrait of…an ogridge! 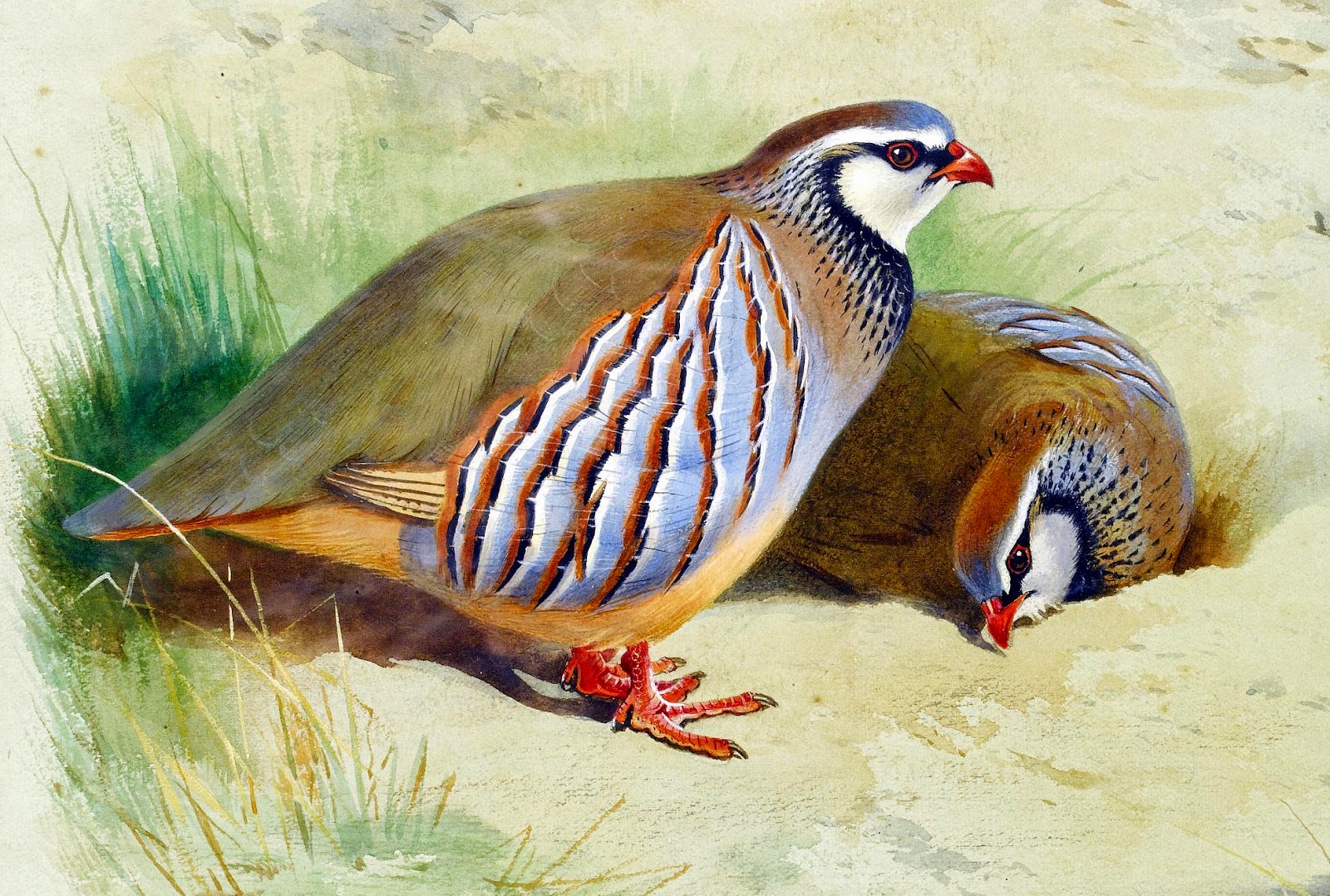 Needless to say, I lost no time in purchasing this precious publication that had verified the reality of the evanescent ogridge, and when I read the full article back home I discovered that it was a specially-bred hybrid of the red-legged partridge Alectoris rufa (a non-native species originally introduced into Great Britain from France in 1673 as an additional game bird to the native grey partridge Perdix perdix, and which has been successfully breeding here since 1790 in a fully-naturalised state) and the chukar A. chukar (another foreigner, native to Asia and southeastern Europe, and first introduced into Britain as yet another target for game bird shooters in 1972 – along with releases of its hybrid progeny, the ogridge). 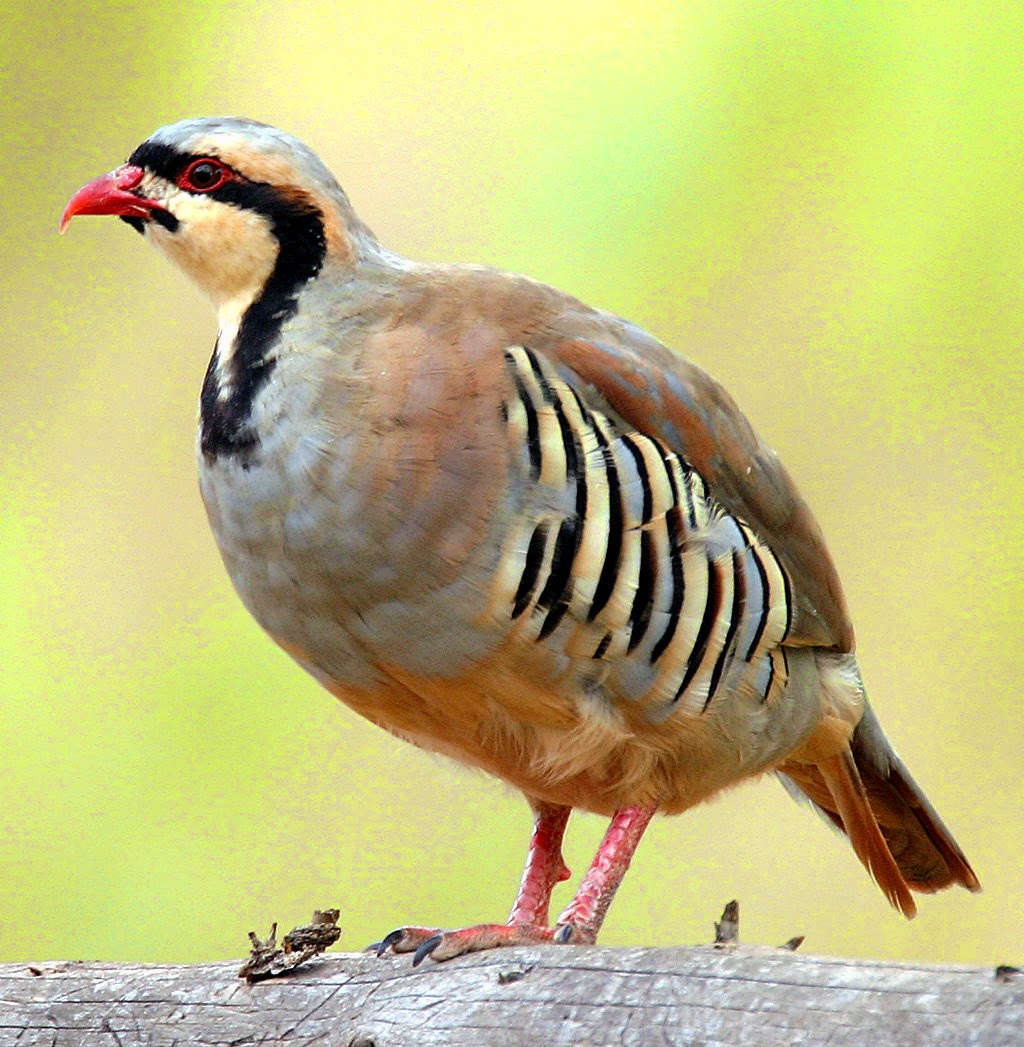 The mystery was finally solved. The ogridge did indeed exist, and was a red-leg x chukar crossbreed. However, as I learnt from Wallace's article, it was also something of an albatross – metaphorically speaking! – in that it had proved to be a rather undesirable addition to the British avifauna. This was because the red-legged partridge's gene pool here was becoming increasingly diluted by such hybridisation, the resulting interspecific gene flow potentially threatening the continuing existence of Britain's pure-bred red-leg stock, the latter now having to compete for survival with both the chukar and their crossbred creation the ogridge (which apparently was expected to be sterile but subsequently proved otherwise). Certainly in recent years red-leg numbers in Britain have declined.

As a result, the licence for permitting the introduction into the wild here of ogridges and pure-bred chukars was not renewed when it expired in October 1988, and all such introductions were officially banned in 1992. However, there are still plenty of both forms out there, especially in southern Britain, and escapes from captivity no doubt also occur from time to time.

Even for twitchers, their presence is problematic, due to their great outward similarities. Indeed, it took several years before any fairly constant plumage differences could be verified – prior to then, even certain birdwatching field-guides were depicting them incorrectly. Perhaps the most evident distinguishing characteristic between red-leg, ogridge, and chukar is their solid-black throat gorget and their throat colour immediately above it. 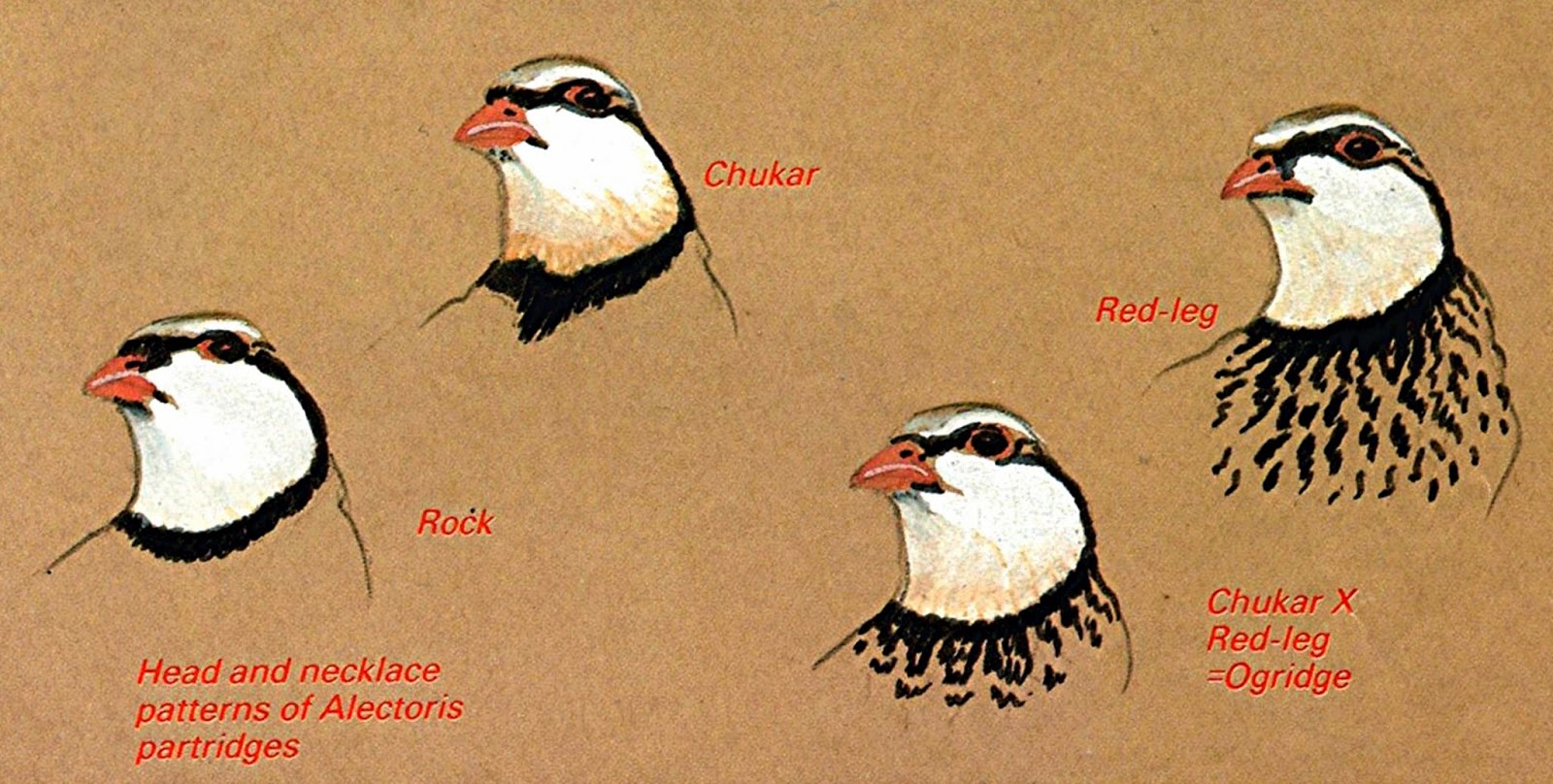 From left to right: close-up of the head and necklace patterns of the rock partridge Alectoris graeca (not occurring in the UK but native to southeastern Europe and closely related to the chukar and red-leg), chukar, ogridge, and red-leg – click to enlarge it (original illustration source/copyright holder unknown to me, but illustration featured in Bird Watching, February 1988)

In the red-leg, the gorget possesses a deep 'necklace' of speckles immediately below it and predominantly white plumage above it. In the ogridge, conversely, the depth of necklace present below the gorget is much-reduced, whereas immediately above the gorget is a rufous-buff crescent (though as with all hybrids, there is much variation upon this basic theme!). And in the chukar, there is normally no necklace at all below the gorget (though a few necklace-sporting specimens have been recorded), whereas immediately above it is a pronounced rufous-buff crescent.

In spite of its modern-day familiarity to ornithologists and game bird hunters alike, online coverage of the ogridge is surprisingly sparse. When preparing this present ShukerNature article, I could only find a handful of reports appertaining to it, and not a single ogridge illustration anywhere. Consequently, and presumably for the reasons outlined above, the ogridge failed to sustain, or possibly even stimulate, the degree of interest and enthusiasm predicted for it in my newspaper cutting from 1972 – the year in which the first specimens were released into the British countryside.

Not such an easy bird to live with, after all? 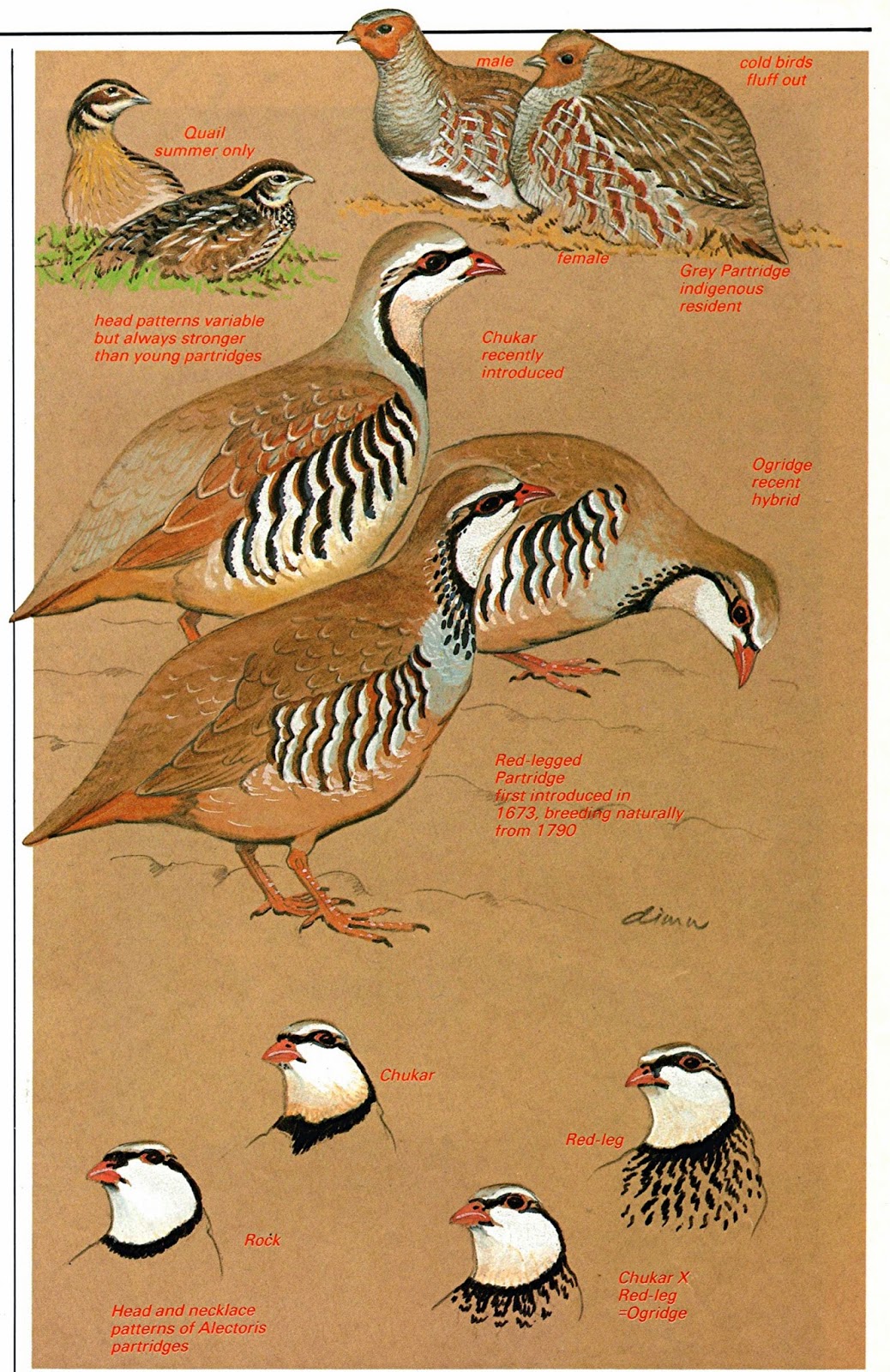