BEHOLD, UNEEKA! UNCOVERING A HITHERTO-FORGOTTEN PHOTOGRAPH OF THE ONLY LIVING LIJAGUPARD EVER TO BE EXHIBITED IN BRITAIN – A SHUKERNATURE WORLD-EXCLUSIVE! 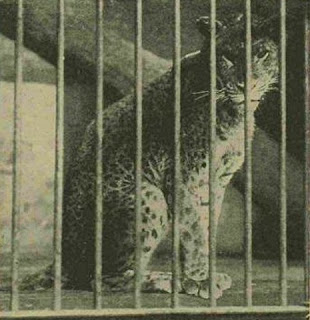 Newly-uncovered by me, the only known photograph of Uneeka the lijagupard in the living state (from the archives of Dr Karl Shuker)

A few months ago here on ShukerNature, I recalled the eventful history of a truly remarkable big cat – namely, an adult female three-way hybrid aptly dubbed Uneeka, her parents being a male lion and a female jaguar x leopard hybrid (click here to access my article), thereby making her a lijagupard. Originally claimed to be a new species and exhibited in London Zoo for just over a fortnight during April 1908, then purchased by Glasgow-based circus/menagerie owner Edward H. Bostock on 2 May for the very sizeable sum of 1030 guineas and taken back with him to Glasgow in Scotland, Uneeka was allegedly killed just over a year later by a lion that supposedly broke through from its own cage into Uneeka's. Yet, very strangely, when Uneeka's pelt was dressed and subsequently mounted as a taxiderm specimen (since displayed in Paris's National Museum of Natural History), it was found not to bear a single tear or scratch.

Although there are photographs available of this taxiderm specimen, some of which have featured in various scientific papers and other publications, as far as I am aware only one illustration depicting Uneeka when alive has ever appeared in any documentation of her. Included in a number of my own writings and also present online, this was a very elegant rendition executed in 1908 by English zoological artist Frederick W. Frohawk – and here it is: 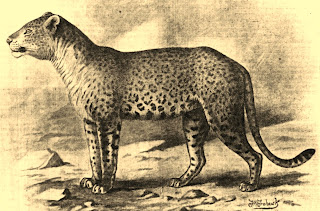 Consequently, I was both delighted but also very startled when recently browsing through some vintage issues of a London weekly magazine entitled the Illustrated London News to discover in one of them a b/w photograph of Uneeka in the living state! Portraying her sitting inside a cage, this zoologically-invaluable image was one of a series of photographs depicting various London-themed subjects that had lately been in the news, all presented together on a single page in the 9 May 1908 issue of this magazine.

And so it is with great pleasure that now, as a ShukerNature world-exclusive, I reproduce here in this present article of mine (the first time to my knowledge that it has ever appeared in a zoological publication) this ostensibly unique, certainly hitherto long-forgotten photograph of Uneeka as a then still-living lijagupard – the only such hybrid ever exhibited alive anywhere in Britain. 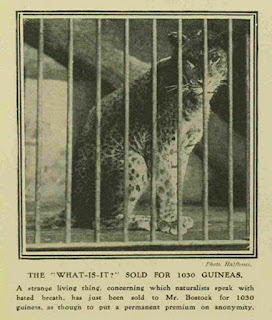 Despite its great age (almost 120 years old), this photograph clearly reveals not only Uneeka's lioness-like head and face but also the large size and intricate patterning of her rosettes, emphasising how extremely attractive and exotic this elegant felid must have appeared to those visitors who had been fortunate enough to observe her during her short period of display at London Zoo and her somewhat longer exhibition at Glasgow prior to her mysterious demise there. The photo's brief accompanying caption confirms that Uneeka had just been sold to Bostock for the afore-mentioned sum of 1030 guineas, so presumably she had been snapped while still in London, and was awaiting transportation back to Glasgow with him.

Down through the years, I have been blessed with some exceedingly fortunate if entirely unexpected, unsought-for picture-related discoveries relative to unusual big cats, of which my uncovering this long-overlooked vintage photograph of Uneeka the lijagupard is only the most recent. 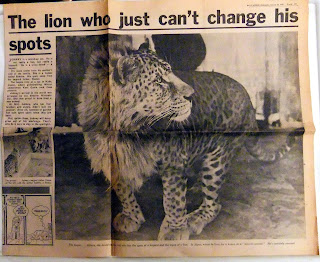 Back in 2000, for example, and via the most unlikely manner conceivable, I rediscovered a copy of an illustrated newspaper article that I had originally seen over 30 years earlier, in January 1970, concerning the popularity in a Japanese zoo of an inordinately handsome male leopon (leopard x lioness) hybrid called Johnny (click here to access my full account of the truly extraordinary events leading up to my refinding this well-remembered but long-lost article).

A few years later, while idly browsing through a box of old picture postcards at a local collector's fair, I spotted – and swiftly purchased – a vintage postcard whose picture was of a domestic dog acting as a foster mother to some lion x tiger hybrid cubs, and which I had never seen before, nor since, but which I subsequently published in my book Cats of Magic, Mythology, and Mystery (2012), the first time as far as I can tell that it had ever appeared in any publication. Interestingly, its caption revealed that these cubs had been displayed at Earl's Court Exhibition Centre in London, and by none other than Frank C. Bostock, who was Edward's brother and a menagerie owner in his own right, as part of his very sizeable touring show Bostock's Jungle. Moreover, I subsequently discovered that it was in 1908 that they had been displayed there, i.e. the same year that Edward H. Bostock's very different and even more notable big cat hybrid Uneeka had been on show at London Zoo. Click here for further details concerning this picture postcard.

Remarkably, not long after happening upon that postcard, and at the very same collector's fair, I was looking through a box of assorted brochures when I found in excellent condition a copy of a Bristol Zoo guide that I had once owned many years ago as a child in the late 1960s but which I had cut up for its pictures, to paste into a scrapbook, and had bitterly regretted doing so afterwards, but had never found another copy of it. The reason why this particular zoo guide had meant so much to me was that its front cover consisted of a beautiful full-colour photograph of a white tiger, the first picture of a white tiger that I had ever seen. But now, almost 40 years later, there was this fondly-remembered picture in front of me again. So, not surprisingly, I lost no time in buying the guide, where it takes pride of place in my collection of zoo guides (click here for more details). 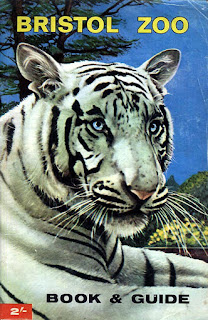 The much-loved Bristol Zoo guide from the 1960s that I was fortunate enough to find again and buy again, after almost 40 years, complete with its beautiful white tiger cover (© Bristol Zoo Gardens/Dr Karl Shuker)

And just last year, I was astounded to learn that a book that I owned just so happened to contain the only known colour photograph of Cubanacan – a magnificent male litigon (the offspring of a mating between a male lion and a female tiger x lioness hybrid). Once the world's largest big cat in captivity, he was born at India's Alipore Zoo in 1979, and had been exhibited there during the 1980s until his eventual death.

Moreover, what made my ownership of a book containing this important photograph even more significant was that Indian researchers had long thought the photo to be lost, until I brought its existence in that book to the attention of celebrated Indian naturalist Shubhobroto S. Ghosh (currently Wildlife Project Manager of World Animal Protection in India). Shortly afterwards, I co-authored with him a Cubanacan-themed article (click here to read it online) in which we reproduced this historic picture for the very first time in any Indian publication (click here for my full ShukerNature account of this wonderful rediscovery).

If only my good fortune in serendipitously unearthing obscure and long-overlooked big cat illustrations could extend to rediscovering equally arcane images of the avian persuasion too – for then, the alleged missing thunderbird photograph (click here for details) might one day be neither alleged nor missing! 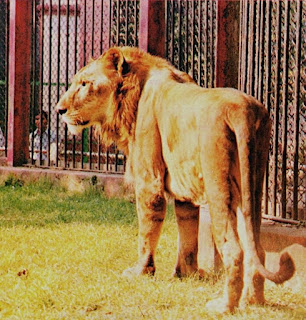 The only known colour photograph of Cubanacan the litigon, which I fortuitously rediscovered (© Alipore Zoo)