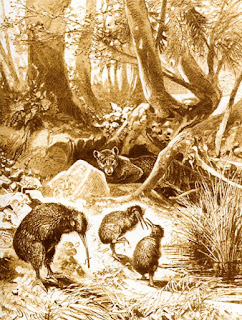 Albeit for all the wrong reasons, a very memorable engraving prepared by Friedrich Specht, portraying a concealed thylacine in the wild paying very close attention to a couple of unsuspecting kiwis nearby – from Das Buch Für Alle (1890) (public domain)

I used to think that double-takes were exclusive to clowns in circuses and comedy actors in silent movies. Yet not so long ago, while browsing the internet in search of information regarding the Queensland moa (click here to read my subsequent ShukerNature coverage of this avian anomaly), I performed a double-take that even the great Chaplin himself would, I'm sure, have been justifiably proud.

And the reason for my doing so was that I had unexpectedly caught sight of the illustration opening this present ShukerNature article – an illustration whose content did not immediately register upon my consciousness, so that my gaze momentarily passed elsewhere – until, that is, its patent zoological absurdity suddenly detonated inside my mind, causing me to look back instantly at it, mesmerised by doubt, amazement, and total bewilderment!

Yes, I had observed it correctly – this extraordinary engraving did indeed portray a concealed thylacine (aka Tasmanian wolf and Tasmanian tiger) Thylacinus cynocephalus in the wild paying very close attention to a trio of unsuspecting kiwis nearby. Artistically, it was well executed, but zoogeographically it was preposterous, for the simple reason that although thylacines are known from physical evidence to have existed at one time or another in Tasmania (confirmed until 1936), the Australian mainland (confirmed until c.2,300 years ago), and New Guinea (confirmed until c.4,500 years ago), these remarkably wolf-like marsupial mammals have never existed at any time in New Zealand, whereas kiwis have never existed anywhere else at any time other than in New Zealand.

So how can we explain this illustration of the impossible, depicting a scene that could never have occurred in nature? 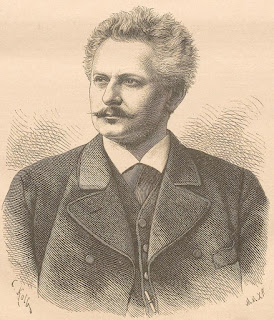 Researching it online, I discovered to my great surprise that this most perplexing picture had been prepared by none other than the celebrated German wildlife illustrator Friedrich Specht (1839-1909), whose exquisite natural history engravings adorned many major multi-volume works published during the late 1800s, including Alfred E. Brehm's Brehms Tierleben (1864-1869) and Sir Richard Lydekker's The Royal Natural History (1894-1896). More specifically, I learned that this particular engraving by him had appeared in Das Buch Für Alle (1890), though I have so far been unable to locate a copy of the latter public-domain book online in order to see the engraving in situ and thus discover the precise context in which it appeared.

Bearing in mind how meticulously accurate his wildlife artwork has always been in the various natural history tomes containing it that I have both perused and purchased down through the years (including Lydekker's above-mentioned series and an English translation of Brehm's), the only plausible if somewhat startling explanation for this incongruous image is that Specht simply wasn't aware either that thylacines have never existed in New Zealand or that kiwis have never existed in Tasmania or mainland Australia. Yet someone as zoologically knowledgeable as Specht would certainly have done, surely?

Perhaps not, because while researching this thylacine-featuring Specht engraving I came upon a second example that included what may be another zoogeographical mismatch. As seen here, this one, which once again had appeared in Das Buch Für Alle, featured two thylacines pursuing an emu Dromaius novaehollandiae. On first sight, this seems straightforward, because Tasmania was indeed once home its very own emu subspecies, D. n. diemenensis, but which, tragically, had been hunted into extinction by the mid-1800s. However, it was supposedly distinguishable morphologically from the mainland Australian version, D. n. novaehollandiae, not only by throat-related colouring and neck feathering differences (paler throat, unfeathered neck) but also by a somewhat smaller overall size.

Yet based upon the relative proportions of the emu and the thylacines depicted in Specht's engraving, and also the appearance of that emu's throat (dark) and neck (feathered), it seems to me that the latter bird is of the mainland Australian subspecies rather than of the Tasmanian subspecies. However, as the thylacine became extinct on the mainland over 2,000 years ago, it would surely be rather unlikely that mainland Australia was the setting portrayed in this image. 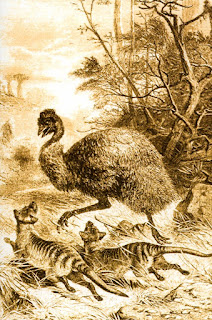 Having said that, it is true that around the time of the Tasmanian emu's extinction, mainland Australian emus were introduced onto its island homeland, and there is even some thought that these mainland interlopers may have actually hastened their native Tasmanian kin into extinction by hybridising with its last few surviving individuals. So, even if Specht's depicted emu is indeed of the mainland Australian subspecies, its occurrence in the presence of thylacines may not be inconsistent with a Tasmanian setting for his engraving after all.

Incidentally, while researching these two anomalous illustrations I also discovered that both of them were included in Tasmanian Tiger: A Lesson To Be Learnt (1998), authored by Eric Guiler and Philippe Godard, with the contribution of David Maguire. Yet while they shared my bemusement regarding the thylacine and kiwis example, and also my reservations concerning the thylacines and emu example, they did not provide any additional background information relating to either of them.

It is often said that a picture is worth a thousand words, but in at least the example of Specht's thylacine and kiwis engraving, it is probably worth a good deal less, with only its high level of artistry to commend it. Even so, discovering it was certainly a highlight of that particular online surfing session for me – then again, I am easily pleased! 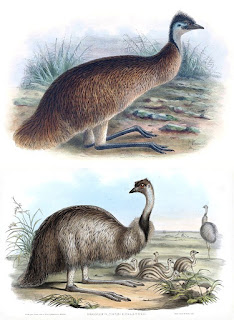