INVESTIGATING THE SEPIA PANDAS OF QINLING - IT'S ALL THERE IN BROWN AND WHITE! 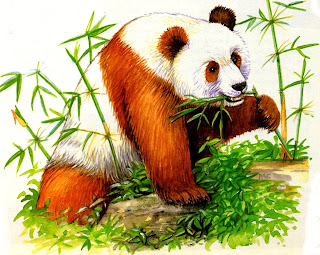 Continuing my intermittent series of early cryptozoological and other anomalous animal articles of mine reproduced here on ShukerNature from their defunct original British and continental European magazines, here is one that was first published in the August 1996 issue of a long-discontinued monthly British magazine entitled Wild About Animals.

It concerns the very eyecatching brown-and-white specimens of the giant panda Ailuropoda melanoleuca that occur in the Qinling mountains of China's Shaanxi Province, and which I've dubbed 'sepia pandas' in my various writings documenting them – an apt colloquial name that has since been utilised (albeit without any credit to me) by various subsequent writers. 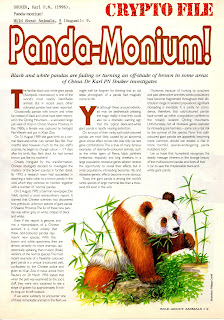 In 1999, I included the following brief coverage regarding Qinling's sepia pandas in my book Mysteries of Planet Earth, which once again also featured Philippa's illustration:

Another famously black-and-white mammal is the giant panda Ailuropoda melanoleuca, but in recent years several brown-and-white specimens have unexpectedly appeared, all within the Qinling Mountains of China's Shaanxi Province. During the 1980s, a female sepia-shaded specimen was captured by biologist Pan Wenshi and exhibited at Xi'an Zoo, where on 31 August 1989 she gave birth to what seemed to be a normal male black-and-white cub, christened Bao Bei. Four months later, however, zoo staff were startled to see that his fur was changing colour, its black portions eventually becoming brown. As the Qinling panda population is both isolated and small, this brown-and-white mutant form may have arisen through inbreeding - rendering visible the effect of a mutant gene normally suppressed.

Since writing those two accounts back in the 1990s, a great deal of additional information re Qinling's sepia pandas has emerged, and in 2012, within my Encyclopaedia of New and Rediscovered Animals, I summarised it as follows:

Ever since its scientific discovery just over 140 years ago, zoologically-speaking this iconic species has always been looked upon as being very much one of a kind. Now, however, a major new study of this singular species by a team of Chinese scientists [published in 2005 within the Journal of Mammalogy] has disclosed that in reality it appears to be two of a kind instead. Led by Zhejiang University panda expert Prof. Fang Shengguo, the team studied and compared the genetics and morphology of giant pandas from Sichuan with those of some from Qinling, and discovered that the two geographically discrete populations exhibited sufficiently marked differences to warrant their classification as two distinct subspecies [formally dubbed A. m. qinlingensis] - the first time that the Qinling giant panda has been separated taxonomically as a panda subspecies in its own right.

NB - Please note that these early articles of mine are being reproduced here for their historical interest; their content may be outdated in places, hence my update above. Also, I'm very sad to say that Philippa's charming panda illustration has been shamelessly reproduced or plagiarised on various websites without either seeking her permission to do so or even crediting her as the artist who originally prepared it. So please bear this in mind if you encounter anywhere else online an image of a sepia panda that looks exactly like or very similar to this one. 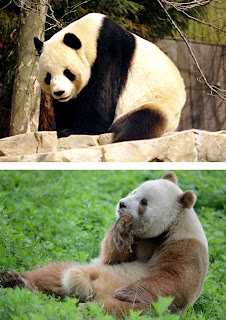