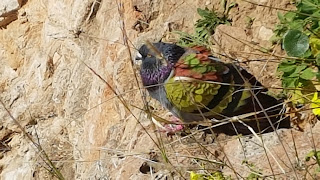 This latest ShukerNature blog article of mine has a twofold mission – not only to entertain and educate (just like I hope that all of my articles do) but also to assist if at all possible in reuniting its poor lost subject with its owner.

On 19 February 2018, Paul Sieveking at Fortean Times forwarded to me for my thoughts a very interesting email that he had received earlier that same day from FT reader Steve Mandell, concerning a most unusual multicoloured pigeon that he had seen during the Spanish holiday from which he and his family had just returned home. Steve also attached two excellent close-up colour photographs of the pigeon in question, and as soon as I saw them I knew the precise nature of their subject. Consequently, I sent details concerning this to Paul, and I also contacted Steve, enclosing in my email to him not only the same details but also a request for permission to document this very interesting case here on ShukerNature and to include in it his two photos. Steve very kindly agreed to my request, so here is the remarkable story behind that equally remarkable pigeon.

Hailing from East Sussex, England, Steve revealed in his email that he and his family had been holidaying at Benalmadena on Spain's Costa del Sol when:

During our stay, we all went on a day trip to the nearby mountain village of Mijas. After a browse around their rather quirky Museum of Miniatures, we took a stroll around the beautiful Parque la Muralla which edges the cliff faces.

We turned a corner to look into a deep gorge where several feral pigeons were basking in the early spring sunshine. Then I noticed, sitting all alone, a pigeon with markings that could only be described as parrot-like. It took me a while to believe what my eyes were seeing as this bird could only be described as a pigeon/parrot hybrid. I have enclosed 2 photos for you and your readers' perusal.

On the bus trip back down to the coast I searched the internet but could only find a story from Queens, NY, which seems to be a hoax and doesn't resemble what I saw…

If anyone can shed some light on what this creature is, I'd be most grateful. If not, I'm laying claim to the discovery of a new species.

Sadly for Steve, what he saw was nothing so ornithologically exciting as either a new species or a pigeon x parrot hybrid, but it is still very interesting, and surprisingly little-known outside Spain. Fortunately, however, I had read about such birds a fair while ago, and therefore knew its secret. It was a domestic racing pigeon, and not some highly-specialised, dramatically-plumed breed either, just a totally standard specimen, but with one significant, peculiarly Spanish variation upon the typical racing pigeon theme. 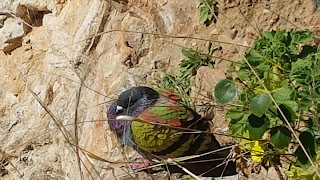 Steve's second photograph of the gaudy-plumed pigeon that he encountered at Mijas, Spain (© Steve Mandell)

In Murcia and Valencia, there is a longstanding tradition among the racing pigeon fraternity for breeders to paint their pigeons in rainbow hues and then release them to pursue a single female pigeon. Whichever male bird stays with the female the longest wins the competition. Each breeder paints his pigeons in different colour complements from those of all other breeders, so the breeders can readily follow their own birds by eye, and rescue them if they should become entangled in foliage, etc. Champion pigeons in this sport are greatly valued, because they bestow immense prestige upon their owners.

So captivated by these varicoloured pigeons, their driven owners, and the whole intense culture surrounding them was photographer Ricardo Cases that in 2011 he published a limited-edition photobook entitled Paloma al Aire ('Pigeon in the Air'), filled with stunning colour photos of the birds and their owners, and which attracted considerable attention later that same year at the Arles photography festival (click here to read an article concerning Cases's book, and here to see a selection of spectacular photographs from it). Indeed, so popular did it prove that in 2014, Cases published a second edition.

Nor are photographs of these Spanish painted pigeons confined to Cases's photobooks. Scouring the internet, I soon found various other photos, including one of a green-winged individual that had been snapped at Bocairent in Valencia but which was extremely similar to the one encountered by Steve in Mijas (click here to view this Valencia specimen) – so much so, in fact, that both birds very likely belonged to the same breeder. Another painted pigeon from the same location in Valencia that I found a photograph of was one with bright orange wings (click here to view it).

(Incidentally, back in August 2012 the famous feral pigeons of St Mark's Square in Venice, Italy, were similarly airbrushed in a polychromatic palette of garish hues by Swiss artist Julian Charrière and German artist Julius von Bismarck, as part of a one-off performance for the architecture Biennale exhibition – click here for details.) 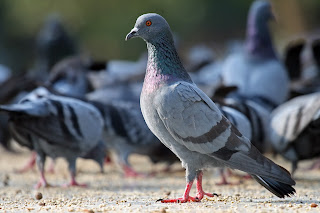 Clearly, therefore, the parrot-plumed pigeon sighted and photographed by Steve was one such Spanish racing bird, but, tragically, it had not found its way back home to its owner. Instead, it was lost, adrift and alone in Mijas, and, as a domestic racing pigeon rather than a feral urban pigeon, had evidently been unable to assimilate with the latter birds, thus explaining its solitary, set-apart existence when seen by Steve.

So this is where you, gentle readers, come in. Wouldn't it be wonderful if this poor stray pigeon could be reunited with its owner? Perhaps it can. If everyone reading this article SHARES it with friends, colleagues, and groups (not just Likes it), so that it circulates far and wide on social media sites, and receives a high placement in search engine listings, then maybe it will be seen by someone who recognises this distinctively-painted pigeon and/or knows its owner and can inform him accordingly of the pigeon's current presence in Mijas – maybe it will even be seen directly by the pigeon's owner himself – who would then be in a position to visit Mijas and seek out his missing bird.

True, I know that it is a long shot, but sometimes long shots are successful, and we all know that remarkable successes have certainly been achieved when the power of social media has been harnessed and mobilised.

So, please, do what you can to help this lost pigeon find its way home – after all, not all miracles are big, some are small, but are just as wonderful if they happen, and who knows, this one just might. Thank you all most sincerely for any assistance that you can offer, and thanks again to Steve Mandell for so kindly making this case and his photos available to me for documentation here. 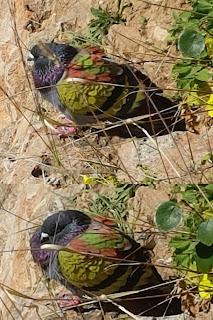 Close-ups of Steve Mandell's two photographs of the lost painted racing pigeon that he saw in Mijas, Spain, during February 2018, and which urgently needs and deserves our help to bring it back home (© Steve Mandell)