Photographs of the moss-overgrown skeleton and skull of a supposed water-horse at Ord, on the Inner Hebridean Isle of Skye, Scotland – please click to enlarge (© Leanne Geraerts)

Whereas Ringo Starr of The Beatles famously wrote and first performed in the 1960s his delightful song Octopus's Garden (one of my all-time favourite Beatles songs) about wanting to be under the sea in the garden of an eight-limbed cephalopod mollusc, all of which in turn irresistibly inspired me when deciding upon a title for this present ShukerNature blog article of mine, the rather more mysterious aquatic entity documented here is beside rather than beneath the sea, and only its mortal remains, well, remain – but they are in a garden, and overshadowed – indeed, overgrown – by moss. Let me explain.

On 15 October 2016, longstanding friend and fellow cryptozoological enthusiast Mike Playfair shared with me on Facebook some fascinating photographs recently snapped by a mutual friend, Leanne Geraerts, during her recent visit to the Inner Hebridean island of Skye. What made them so fascinating was their subject – the alleged skeleton of an each uisge, the much-dreaded Scottish water-horse! 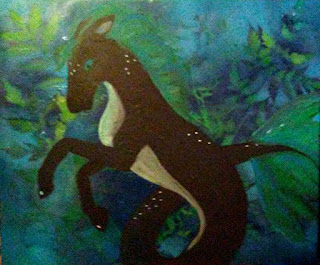 Although a local attraction at Ord on Skye, where it is ensconced in the garden of a private home next to Ord's beach and easily observed in close-up detail by passers-by, this remarkable specimen has attracted surprisingly little cryptozoological attention, and these were the first photos of it that I had ever seen. According to the somewhat laconic public information plaque alongside it:

EACH UISGE EARBALLACH
HYDRO EQUUS EXTENDUS
LONG-TAILED WATER HORSE
This is the only known example of this rare beast - a distant relative of the better known Monstra Nessium Hydro[.] E.E. is usually sighted only twice a year when it swims inshore to browse on whelks. This specimen was stranded at an exceptionally low tide in 1967.

The skeleton is nowadays greatly overgrown with moss, but its basic anatomical features were still clearly visible, revealing it to be some form of whale. Scouring for more visual material online, I discovered a handful of websites that mentioned it briefly and included a few additional pictures (click here for the Faery Folklorist's observations and photos of it), but surprisingly its precise taxonomic identity did not appear to have ever been investigated. Consequently, I duly posted in my Journal of Cryptozoology Facebook group and several others some links to these sites and their photos, which attracted considerable interest.

Moreover, based upon close comparisons of photos of its skull with ones depicting those of the various cetacean species known to inhabit or visit Scottish waters, I was able to determine that the water horse of Ord had actually been a Cuvier's beaked whale Ziphius cavirostris. This identity was also fully supported by fellow cryptozoological investigators Markus Bühler, Markus Hemmler, and Cameron McCormick. Incidentally, a Cuvier's beaked whale skull also proved to be the identity of another interesting initially-unidentified specimen (click here for details and for sight of an excellent photo of the skull, in turn providing an additional comparison with that of the Ord water horse).

For although its skull superficially resembles that of the northern bottlenose whale Hyperoodon ampullatus, the shape of the vertex (the upper skull portion, composed of four bones - the frontal, the paired parietals, and the occipital) corresponds much more favourably to that of one of the latter species' relatives, Ziphius, which is commonly found in waters surrounding the British Isles. Another cryptozoological mystery solved. 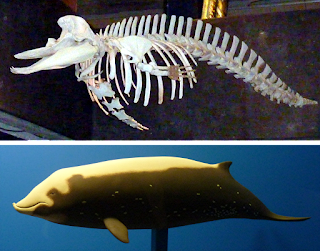 My sincere thanks to Leanne Geraerts for very kindly making her photographs available to me, to Mike Playfair for bringing yet another fascinating cryptozoological specimen to my attention, and to Markus Bühler, Markus Hemmler, and Cameron McCormick for their much-valued thoughts and opinions.

This ShukerNature blog article is excerpted and expanded from my Alien Zoo cryptozoology news-roundup column in Fortean Times #348 (Christmas 2016 issue). 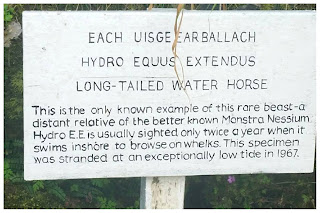