'THE SHAPE OF WATER' - A SHUKERNATURE REVIEW 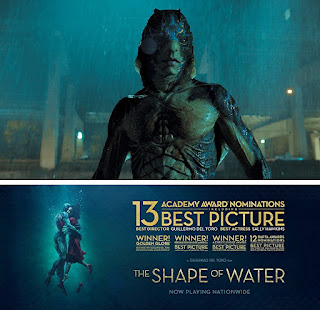 Film still featuring the Amazonian gill man from The Shape of Water (2017 - first screened on 13 February 2018 in the UK) and a publicity poster for it (© Guillermo Del Toro/TSG Entertainment/Double Dare You Productions/Fox Searchlight Pictures – reproduced here on a strictly educational, non-commercial Fair Use basis for review purposes only)

Yesterday afternoon I paid my first visit of 2018 to my local cinema, to see The Shape of Water, and what a memorable, moving, and thoroughly mesmerising movie it was.

A fantasy drama directed by Guillermo del Toro, which earned for him a greatly-deserved BAFTA award for Best Director last Sunday, it is based upon a story co-written by him and Vanessa Taylor, and pays homage to a favourite monster movie from his childhood – the classic b/w 1950s film The Creature From the Black Lagoon. However, it also readily recalls one of his own earlier movies, Pan's Labyrinth (click here to read my mini-review of this equally spellbinding film after watching it last year), which is another dark fantasy by him imbued with the same fundamental message proffered now in The Shape of Water - namely, that love knows no boundaries, that love really can conquer all. 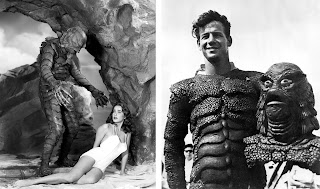 Film still featuring the gill man (played on land by Ben Chapman) and Kay Lawrence (Julie Adams) in The Creature From the Black Lagoon (1954); and photograph of Ricou Browning, the uncredited actor who played the gill man in underwater scenes, with the gill man's head costume (© Jack Arnold/Universal Pictures – reproduced here on a strictly educational, non-commercial Fair Use basis for review purposes only / public domain)

The Shape of Water is a deftly-fused mash-up of the intrinsic themes present in Charles Perrault's timeless fairy tale Beauty and the Beast (self-explanatory) and Victor Hugo's immortal novel The Hunchback of Notre Dame (who is the monster, and who is the man?), and depicts both components brilliantly. For 'creature feature' aficionados and cryptozoologists alike, the film's visual focus is an Amazonian gill man (bearing a notable resemblance, as it does, to certain amphibious humanoid entities allegedly encountered in reality - click here to read a ShukerNature article by me concerning them), who had been worshipped as a living god by the local native tribes before being captured alive by sadistic military man Colonel Richard Strickland (played with tangible malevolence by Michael Shannon) and hauled back by him to a top-secret aerospace research facility in Baltimore, USA. Here he plans for this astonishing being, capable of breathing both on land and underwater, to be vivisected in order to learn how it functions physiologically, as a means of determining how humans could be modified or at least assisted in the future to live in Space, and thereby placing the USA far ahead of competing Russian technology during this early 1960s Cold War-set time period.

Played by Doug Jones in a truly stunning, breathtaking performance, this freshwater bipedal merman is an absolute triumph of seamless acting skill, costume creation, and overlain CGI, who conveys an incredible diversity of emotions, from savage survival to tender love, without speaking a single word. And so too does the heroine, Elisa Esposito, played with BAFTA- and Academy Award-nominated genius by Sally Hawkins, a young woman working as a cleaner at the research facility who for reasons darkly hinted at but never confirmed has been mute since her earliest days, when she was rescued from a river as an abandoned orphan with unexplained scars on her neck, but she can hear normally and is able to communicate far more eloquently than most people who are gifted with speech. 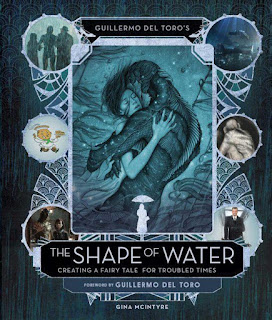 It contains one truly gory but mercifully brief scene, in which one of their allies is hideously tortured by the vengeful Strickland after Elisa rescues and flees with the gill man just before it is due to be vivisected, but otherwise this magical, totally captivating film is required, unmissable viewing for lovers of sci-fi, fantasy, cryptozoology, period drama, and yes, romance too.

The period settings were superb, especially Elisa's apartment and that of her artist friend Giles (played by Richard Jenkins) down the hall, and so too were the evocative songs from the 1940s (an era beloved by Giles) – including a particular favourite of mine from that bygone age, 'I Know Why (And So Do You)', which served as a recurrent, unofficial theme (click here to view and listen to the version utilised, featuring Paula Kelly & The Modernaires with the Glenn Miller Orchestra, which originally appeared in the 1941 movie Sun Valley Serenade). However, the vibrant magnetism between Elisa and the gill man, communicated wordlessly throughout but with palpable, ever-increasing intensity, is the beating heart of this extraordinary film. 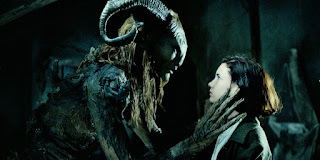 Without giving anything away, the sublime ending of this movie and of Pan's Labyrinth are very similar in theme and execution, but given the nature of their stories there could have been no other option - any other conclusion would have cheated the audience and made a mockery of these films' raison d'être. If you see no other movie on the big screen this year, do go and see The Shape of Water, which is definitely afforded a significant additional dimension by a cinematic presentation. It has justifiably been nominated for no fewer than 13 Academy Awards, and, for a couple of hours, enables us to enter another world, one of fantasy, terror, pathos, and, above all, love - in all of its strange, hypnotic, unfathomable, indefinable, but life-empowering potency and glory. And if after having read my review, you still don't believe me, be sure to click here to view a tempting taster of a trailer for this movie currently accessible on YouTube.

Finally, and on a very personal note, in the last few seconds of the film the artist character Giles, who opened the film with a few words of introduction, ends it now with a few more, this time including a quote from a poem that I wasn't previously familiar with, but whose words, for reasons that those of you who know me and my own story well will fully understand, resonated within not only my heart but also my very soul, so that for several minutes after the film had ended and the credits were rolling by, I just sat there, alone, in the darkness, and remembered...

Unable to perceive the shape of you,
I find you all around me.
Your presence fills my eyes with your love,
It humbles my heart,
For you are everywhere. 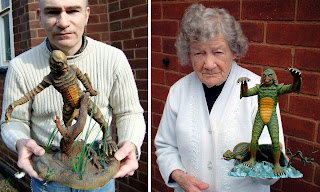 My mother Mary Shuker and I, holding my two models of the gill man from The Creature From the Black Lagoon movie, which was Guillermo del Toro's inspiration for The Shape of Water (© Dr Karl Shuker)

I'm delighted to announce that The Shape of Water won 4 Academy Awards at the 90th Academy Awards ceremony, held on 4 March 2018, the most won by any individual film at this year's Academy Awards ceremony. Its awards were for Best Film, Best Director (Guillermo del Toro), Best Original Score (Alexandre Desplat), and Best Production Design (Paul Denham), Many congratulations to all concerned, and very greatly deserved.