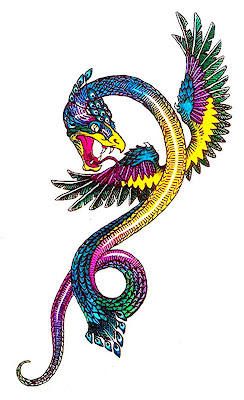 A winged feathered serpent from Glamorgan (as appearing on the front cover of my book From Flying Toads To Snakes With Wings (Llewellyn: St Paul, 1997))

British mythology is replete with folktales and legends of fabulous beasts, including many that feature dragons and other reptilian monsters. Surely the most remarkable of these, however, are the jewel-scaled, plume-winged wonders that were reportedly still existing in Wales as recently as the 1800s.

Marie Trevelyan brought these exquisite creatures to widespread attention in her book Folk-Lore and Folk Stories of Wales (1909), and her description of them is so vibrant and uniquely detailed for such an ostensibly implausible type of beast that it deserves quoting here:

"The woods round Penllyne Castle, Glamorgan, had the reputation of being frequented by winged serpents, and these were the terror of old and young alike. An aged inhabitant of Penllyne, who died a few years ago [c.1900], said that in his boyhood the winged serpents were described as very beautiful. They were coiled when in repose, and "looked as if they were covered with jewels of all sorts. Some of them had crests sparkling with all the colours of the rainbow." When disturbed they glided swiftly, "sparkling all over," to their hiding places. When angry, they "flew over people's heads, with outspread wings bright, and sometimes with eyes too, like the feathers in a peacock's tail." He said it was "no story invented to frighten children," but a real fact. His father and uncle had killed some of them, for they were "as bad as foxes for poultry." The old man attributed the extinction of the winged serpents to the fact that they were "terrors in the farmyards and coverts."

"An old woman, whose parents in her early childhood took her to visit Penmark Place, Glamorgan, said she often heard the people talking about the ravages of the winged serpents in that neighbourhood. She described them in the same way as the man of Penllyne. There was a "king and queen" of winged serpents, she said, in the woods round Bewper. The old people in her early days said that wherever winged serpents were to be seen "there was sure to be buried money or something of value" near at hand. Her grandfather told her of an encounter with a winged serpent in the woods near Porthkerry Park, not far from Penmark. He and his brother "made up their minds to catch one, and watched a whole day for the serpent to rise. Then they shot at it, and the creature fell wounded, only to rise and attack my uncle, beating him about the head with its wings." She said a fierce fight ensured between the men and the serpent, which was at last killed. She had seen its skin and feathers, but after the grandfather's death they were thrown away. That serpent was as notorious "as any fox" in the farmyards and coverts around Penmark."

In 1812, very similar beasts were also reported in the Vale of Edeirnion, northern Wales.

What could have inspired such astonishing accounts? Remarkably, it has been suggested by one or two folklorists and cryptozoologists that these truly exceptional creatures were pheasants. As the ring-necked pheasant Phasianus colchicus (the only species present in Wales during the early 19th Century) was introduced into Britain back in Roman times, however, it seems unlikely that a species so well-established here by the 1800s could be mistaken for anything as exotic as a plumed serpent with wings. In any case, only the males of this pheasant species possess colourful feathers. 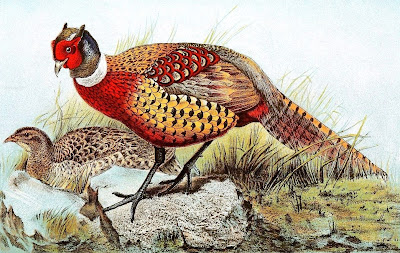 19th-Century colour illustration of a pair of ring-necked pheasants

Even less likely is the prospect that they represented an unknown species of pheasant, one perhaps that was more elongate in form than usual (possessing a longer-than-typical neck and tail?), so as to present a vaguely serpentine appearance. For if this were so, there is no doubt whatsoever that many specimens of such a distinctive and extremely eyecatching bird would have been diligently preserved as prized taxiderm exhibits in country manors and museums. Such a striking form of game bird would also have been extensively documented and depicted in countryside magazines or those devoted to hunting and shooting - sports that were extremely prevalent and popular throughout Britain two centuries ago, and obviously it would have been instantly recognised by hunters, poachers, and gamekeepers alike as a mere bird, not some bizarre reptilian entity more akin to the Aztecs' deified Quetzalcoatl!

In short, if such a spectacular, impossible-to-overlook bird had ever inhabited Wales as late in time as the 1800s, it would have been formally discovered and described long before it was ultimately exterminated. Instead, it is conspicuous only by its absence from natural history tomes and from any other wildlife publications, being solely confined to the pages of Trevelyan's book and to scant mentions elsewhere in other works of British mythology.

Equally difficult to explain if these bedazzling beasts were genuinely pheasants (known or unknown species notwithstanding) is their appetite for the farmers' chickens, earning them the reputation of being as troublesome on this score as foxes. Whereas male pheasants can be aggressive, it hardly need be pointed out that they do not feast upon chickens. Ditto for the possibility that they constituted escapee peacocks. And there is no known bird of prey native to Britain (or, indeed, anywhere else in the world for that matter) that matches the multicoloured, glittering appearance described for the thoroughly baffling albeit very beautiful creatures under consideration here.

An amphiptere, as depicted in a medieval bestiary

The same situation also arises when seeking parallels outside the confines of recognised natural history, by venturing forth instead within the more flexible boundaries of zoomythology. An association with buried treasure or similar hoards of riches is of course a familiar theme in dragon myths, but otherwise there is nothing even vaguely comparable between Wales's winged feathered serpents and any other beast in British legends and folklore. (True, a few amphipteres occur - winged serpent dragons, i.e. resembling snakes but dragon-headed and possessing a pair of bat-like wings - but these are not clothed in flamboyant plumage.) For not only is their morphology exceptional, so too are their surprising erstwhile abundance and the acceptance of them by the local people as relatively mundane members of the area's fauna.

If only the skin and feathers of a killed specimen had been preserved and submitted for scientific examination instead of being discarded. After all, it's not every day that the opportunity to examine the mortal remains of a winged, feathered, serpent arises! 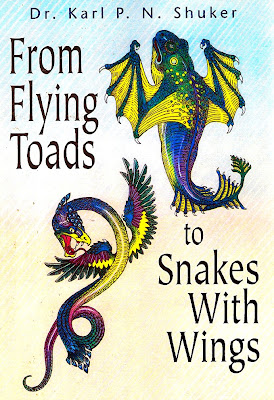