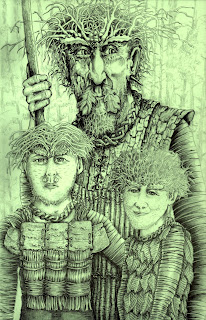 Green-tinted version of 'Family Tree', by Robert M. Williams, chanced upon and purchased by me as a large-sized print in a charity shop at Warwick, England, in c.2012 (© Robert M. Williams – reproduced here on a strictly non-commercial Fair Use basis only)

One of my favourite races of being in J.R.R. Tolkien's The Lord of the Rings trilogy are those animate trees known as ents, but I always assumed that they were totally fictitious. Thanks to some fascinating if thoroughly perplexing information received by me recently, however, I'm no longer quite so sure!

On 16 August 2016, Portuguese correspondent Tiago Cardoso kindly brought to my attention and also translated into English for me a short item from Vanessa Fidalgo's book Seres Mágicos em Portugal [Magic Beings in Portugal], published in 2014, but which I have not previously seen mentioned in any English-language publication. The item concerns a mystifying being known locally as the homen-galho or twig man, and here it is:

I will tell a story that was told to me by my grandfather, about a creature that lives in the forest near the village of Pessegueiro, in northern Portugal.

According to my grandfather, when he was a young man, that is, about 40 years ago, during an autumn night there in the village of Pessegueiro a group of friends of which he was part spotted a naked creature that moved as a man (i.e. on two legs), but the head appeared to bear tree twigs. It was exceptionally tall and thin. When it noticed them, the creature was perplexed to see them, a situation which gave the impression that its eyes were human, but also allowed them to see that it had something that looked like moss on its face. My grandfather and his friends chased the creature, entering into the forest, throwing stones at it, but when they entered the densest areas of the grove, they lost sight of it.

Then, they heard animal-like noises, and dragging of vegetation, which, in the exact words of my grandfather: "stopped everything, until the animals became afraid and fled".

At that moment, they also fled, in panic, to the village cafe, where they told what had happened. Obviously at that time no one believed their account, but, over the years, people here have heard more accounts of sightings of this creature. It seems that the descriptions were continuing until six years ago. 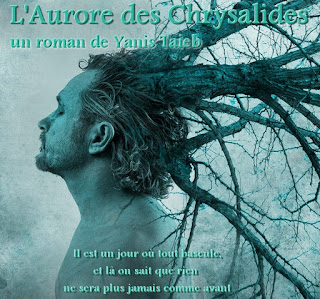 Front cover of the novel L'Aurore des Chrysalides written by Yanis Taieb, which features an entity reminiscent of twig man descriptions (© Yanis Taieb – reproduced here on a strictly non-commercial Fair Use basis only)

It was six years ago when it was last reported, by a group of young people...They were in the street when they heard a strange noise, similar to the noises made by the dragging of something very heavy. They came to see what was there, and that was when one of them saw a very thin, strange figure, and he exclaimed: "Look that man, he looks like a twig!".

Then, they all remarked about the man having tree-trunk-like structures on its head, and they associated this immediately with the description that they had heard from old men. Like the group containing my grandfather, they ran to the nearest cafe to find people and to claim that they had seen the 'twig man'.

At first, no one understood what they were talking about, but after a more detailed explanation everyone ran to the place of their sighting, but there was no longer anything there. Only a total silence.

Since that day, no 'forest creature' or 'twig man' has been seen, but in the village the story never died and everybody knows that in the forest exists something that is not human.

When I first read this, I wondered about wild men or woodwose, as such entities have been reported in Spain right into modern times, but the repeated claims that Portugal's twig man has tree-like twigs or trunks projecting from its head are certainly very difficult to explain via this identity. Having said that, moss on its face is less problematic, so might the twigs simply be vegetation caught up in the hair on the creature's head?

Yet even if this is so, its extreme thinness and tallness does not recall wild man reports, in which their dimensions tend to be little different from those of modern, civilised humans. 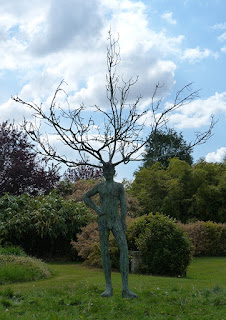 Conversely, what the twig man does closely resemble is the LOTR ent, typified by the stately Treebeard, and who knows, perhaps this fictitious yet famous entity has indeed directly inspired and coloured the twig man reports. Yet it seems unlikely that such a blatantly invented creature as an animate tree would do this. So at present, the Portuguese twig man is a notable enigma - a legend come to life, or even a fictional entity made factual.

If any ShukerNature reader knows anything about the twig man, I’d love to hear from you. Meanwhile, my thanks to Tiago Cardoso for alerting me to this incongruous Iberian. 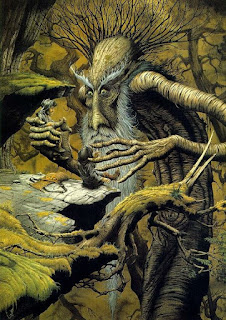