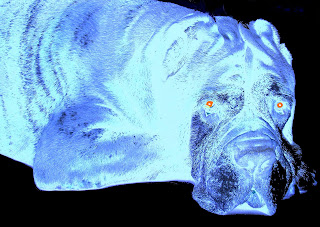 Telling ghost stories during the Christmas season is a longstanding Yuletide festive tradition, so here is ShukerNature's contribution for Christmas 2016. But what makes this particular story very special is that its phantom protagonist may actually be real! The apparition in question is the blue ghost dog of Rose Hill, just outside Port Tobacco, a once-thriving seaport in Charles County, Maryland, USA.

According to local tradition, during the political unrest leading up to the American Civil War (or leading up to the American War of Independence, a century earlier, in some versions), a Yankee soldier-peddler called Charles Thomas Sims, accompanied by a huge mastiff-like tick hound with unusual blue-grey fur, sought warmth and shelter one very wintry 8 February at the St Charles Inn, one of many waterfront taverns in Port Tobacco at that time. 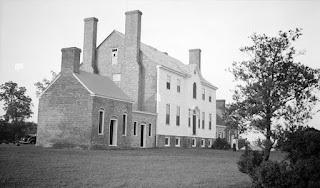 Once inside, however, he soon became so intoxicated that he clumsily spilled a number of gold coins out of his purse. This attracted the keen attention of a gang of rough youths, led by a ne'er-do-well named Henry Hanos, who lost no time in luring him out of the inn and the town, leading him instead along Rose Hill Road and up to the vast grounds of Rose Hill Manor atop a lonely hill just outside Port Tobacco.

Here, securely out of sight of the town's populace, Hanos and his mob clubbed the hapless Sims and his dog to death on a big rock in the manor's grounds, near the roadside, and then stole his gold, burying it under a holly tree alongside the road on the hill for safekeeping, but planning to return later and retrieve it. When they did return, however, they were horrified to see a monstrous dog surrounded by an eerie blue phosphorescence howling on the rock, the site of its master's murder and its own  too - and as soon as they tried to draw nearer, the dog raced towards them in hellish fury! 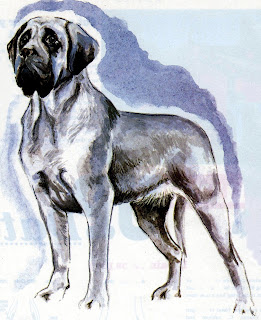 Artistic representation of the phantom blue mastiff of Rose Hill (© Unknown artist/All About Dogs, January-February 1998, reproduced here on a strictly non-commercial, educational/review Fair Use basis only)

Screaming with terror, the youths fled, never coming back, and Hanos swiftly fell ill, dying abruptly soon afterwards. Since then, several others have boldly ventured to Rose Hill to seek Sims's gold, including some troops of General Joseph Hooker fighting near here in the Civil War - but when confronted by the unearthly luminous blue dog, they have swiftly departed this accursed spot, leaving the gold untouched. Moreover, the former owner of Rose Hill Manor in whose grounds the killings allegedly took place, Olivia Floyd, an erstwhile Confederacy spy during the Civil War, claimed in an interview with the Port Tobacco Times newspaper in 1897 to have once seen the great glowing hound there herself – the earliest written documentation of it.

Today, the blue ghost dog is very much a local celebrity in Port Tobacco, which is home to an ornate sign depicting it and even boasts a Blue Dog Saloon containing a huge and very beautiful oil painting by local artist Don Zimmer portraying the tragic scene of the slain Sims lying dead amid a desolate snowy landscape and the teary-eyed ghost of his faithful dog lying close by. Moreover, prints of this magnificent painting can actually be purchased, with all proceeds going towards the Nanjemoy Neighbors Water Project (click here to visit the official website at which to buy a print of the painting). 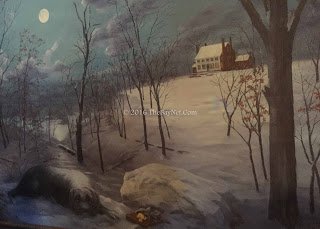 The legend of the blue ghost dog of Rose Hill is often stated to be the oldest ghost story in the entire USA, but is it more than just a local folktale? And, if so, are sightings of this terrifying canine apparition still occurring today? (I've read claims that sightings have reputedly occurred as recently as the 1970s, and most frequently during the month of February, but with no details supplied.)

I have no idea of the answers to these questions, so what I'm going to do now is what I always do in situations like this. Namely, request that if anyone reading my present ShukerNature article has further information concerning its subject, and especially any details regarding possible modern-day encounters with the phantom dog itself, please do post them here, as I'd be very interested indeed to receive and read them. Thanks very much! 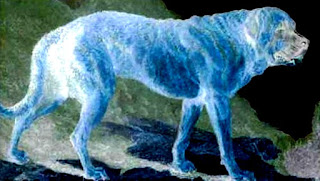 Could the phantom blue mastiff of Rose Hill look something like this? (© Dr Karl Shuker)