DEBUNKING THE DISCOVERY OF A DEAD DRAGON 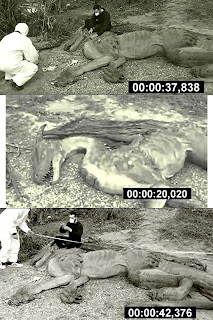 I investigated and debunked the following case back in summer 2016, and others have done so too, but as it is still inciting speculation online I am presenting herewith on ShukerNature my own findings regarding it, in the hope that this deceased dragon can finally be laid to rest permanently.

In August 2016, several correspondents brought to my attention a remarkable b/w video snippet doing the rounds online that showed a team of scientists apparently finding the recently-deceased, still-intact, non-decomposed body of a bona fide dragon. Worryingly, judging from comments posted underneath the video, quite a few people seriously considered it likely that this beast was real. Consequently, I lost no time in investigating the video to determine its origin and uncover the true nature of the dragon in it. Happily, I soon discovered that the video was actually a deliberately-created faux film clip contained within a Spanish TV documentary on dragons entitled Cuarto Milenio (Fourth Millennium), fronted by zoologist Fernando Gonzalez.

Moreover, the dragon itself was a very skilfully-produced, large-sized model, over 12 ft long, created specifically for the documentary by acclaimed Spanish artist-sculptor Juan Villa Herrera and a team of assistants at his workshop, which took a week to prepare. The dragon was constructed from latex and flexible foam, except for its wings, teeth, and claws. Unfortunately, some unidentified person(s) had taken a copy of the documentary's faux film clip and had distributed it online as proof that dragons do exist, thereby creating the appreciable confusion that duly ensued – and which even engendered a variant claim that the dragon in question had been found in Tibet! 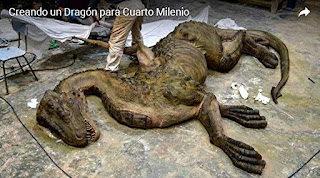 And for the most comprehensive and extensively-illustrated documentation of dragons currently in print. be sure to check out my full-colour book Dragons in Zoology, Cryptozoology, and Culture – the perfect Christmas present for all serious draconophiles everywhere! 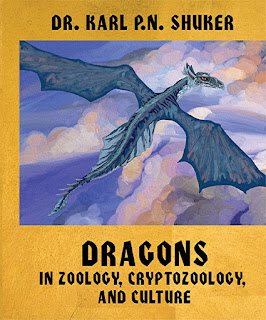