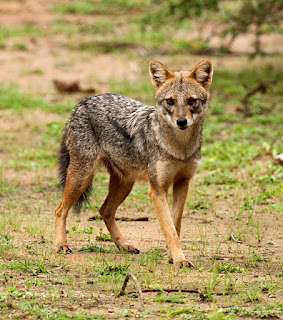 THAT’S WHY THEY CALL HIM THE LEADER OF THE PACK!
It was in 1980, when Arthur C. Clarke very briefly alluded to it (together with Sri Lanka's equally contentious devil bird - click here) in a cryptozoological episode from his television series Arthur C. Clarke's Mysterious World, that I first learned of the horned jackal. I began at once to seek out and amass more information – which included data kindly supplied to me by Arthur C. Clarke himself after I wrote to him explaining my desire to uncover material regarding it – and I was surprised to find that quite a lot of relevant details had indeed been documented, but had hitherto received scant publicity, concerning this remarkable mystery beast. 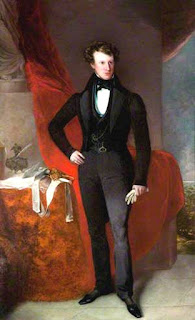 One of the most detailed accounts, complete with illustrations, featured in Sir James Emerson Tennent's excellent book Sketches of the Natural History of Ceylon (1861). Tennent revealed that there is a widespread belief among the Singhalese and Tamil people of Sri Lanka that the leader of each pack of common or golden jackals Canis aureus naria on this island bears a small horn on its skull. Widely referred to as the narri-comboo or narric-comboo, and generally hidden from view by a tuft of fur, this unexpected horn measures about half an inch long.

According to Tennent, it protrudes from the back of the jackal leader's skull - as depicted by a diagram in his book of a horned jackal's skull formerly preserved at London's Museum of the College of Surgeons. Nevertheless, in certain other books that I have consulted, there have been claims that a horned jackal's narri-comboo protrudes from its brow. Perhaps, therefore, its precise position on the skull varies between individuals. Tennent's book also described and illustrated a specimen of the horny sheath from a narri-comboo that had been presented to him by the then district judge of Kandy, a man called Lavalliere.

HORNING IN ON THE LETTER OF THE LAW
One aspect of the narri-comboo that does not vary, however, is the fervent belief shared by Sri Lankan inhabitants throughout the island that this insignificant cranial curiosity is somehow bestowed with extraordinary magical powers - powers that render invincible in all lawsuits anyone fortunate enough to own one of these strange objects.

Moreover, if placed alongside a person's jewellery, a narri-comboo is said to prevent the jewellery from being stolen. And if this horn should somehow be lost it has the very obliging ability to return magically, of its own accord, to its owner. Clearly, no home should be without one! 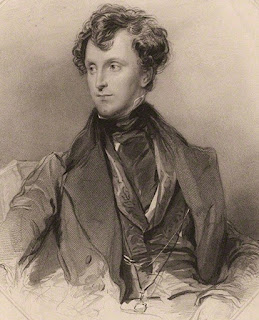 One of the most entertaining accounts of a narri-comboo's magical (and highly devious) legal machinations appeared in Tennent's book (and should perhaps be borne in mind by anyone with plans to practise law in Sri Lanka!):

A gentlemen connected with the Supreme Court of Colombo has repeated to me a circumstance, within his own knowledge, of a plaintiff who, after numerous defeats, eventually succeeded against his opponent by the timely acquisition of this invaluable charm. Before the final hearing of the cause, the mysterious horn was duly exhibited to his friends; and the consequence was, that the adverse witnesses, appalled by the belief that no one could possibly give judgement against a person so endowed, suddenly modified their previous evidence, and secured an unforeseen victory for the happy owner of the narric-comboo!

Even today, a narri-comboo is greatly prized as a lucky talisman by Sri Lankans, though whether the jackals killed for their horns would share this view is another matter entirely.

Logic dictates that the latter aspect of narri-comboo lore must surely owe more to legend than fact, because as pack leadership is not inherited in a predetermined manner from father to one specific male offspring, it is not possible to offer any genetically-based explanation for the supposed restriction of horn development to pack leaders. Similarly, if horn growth occurs in response to some external influence, i.e. stimulated perhaps by a physical blow or injury, one would expect other jackal individuals, not just the leader, to develop horns. 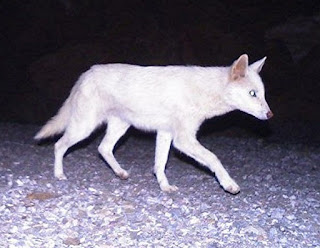 However, externally-induced horn growth may resolve current uncertainty regarding the precise point of origin of the horn on a jackal skull. This is because such a structure might develop from any cranial region that suffered a severe blow. Adventitious horn development via this mechanism has been reliably recorded from other mammal species on occasion.

Possibly the biggest mystery of all, however, is why horned jackals do not seem to have attracted the same degree of attention elsewhere. Canis aureus is distributed widely in Asia and Africa, and has even been reported in eastern Europe, so why do there appear to be far fewer details of horned specimens recorded from outside Sri Lanka? (I am aware only of some sparse information from Bengal and Nepal.) Perhaps there are such records on file somewhere, but they simply haven't been publicised. So if any readers do happen to come across any horned jackal accounts emanating from beyond the shores of former Ceylon, I'd love to hear from you! Meanwhile, further details concerning Sri Lanka's perplexing horned jackal and devil bird can be found in my book From Flying Toads To Snakes With Wings. 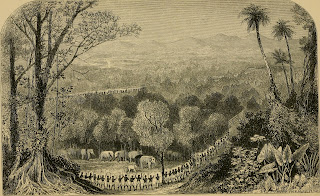