MONKEYS WITH WINGS IN NAPA, OH MY!! 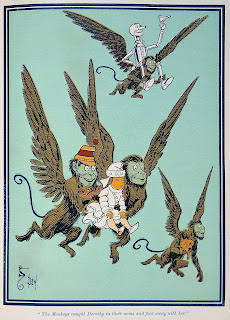 Winged monkeys seizing Dorothy and her companions, in one of W.W. Denslow's exquisite illustrations from the first edition of L. Frank Baum's classic children's novel The Wonderful Wizard of Oz (1900) (public domain)

Following yesterday's ShukerNature blog article regarding a lost Chinese gibbon, here's another one dealing with a simian, but not a Sinian simian, not even a similar simian – far from it! I always enjoy documenting unusual, unexpected mystery beasts – and they don't come more unusual or unexpected than this one!

Among the many memorable spectacles on view in MGM's immortal 1939 fantasy musical film 'The Wizard of Oz' (based upon L. Frank Baum's classic children's novel The Wonderful Wizard of Oz, first published in 1900) was a flock of malevolent flying monkeys that did the Wicked Witch of the West's evil bidding. According to various decidedly bizarre claims and sightings emanating from California's Napa Valley, however, these monstrous things with wings may not be entirely confined to the movies (or novels). 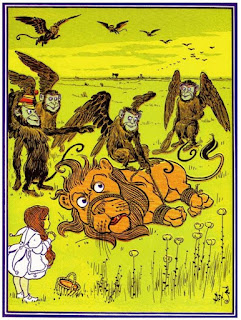 In September 2018, mysterious entities with bat-like wings, red eyes, long fangs and claws, black fur, and said to bear a striking overall resemblance to said flying monkeys were reported from around Partrick Road, which is just outside the town of Napa. Apparently, they would traditionally lurk amid the shadowy trees fringing this particular stretch of secluded back-road, winding out of Napa and through a dense forest, in order to accost the young amorous couples who parked here for some private sessions of passion. Nowadays, however, presumably because fewer such sessions occur as reports of these uncanny beasts have intensified, the volant voyeurs have taken instead to pursuing any car that drives along Partrick Road, regardless of whether or not it stops. At the far end of this lonely road is the blocked entrance to a forsaken, long-abandoned cemetery once owned by the Partrick family after whom the road is named, where the flying monkeys supposedly dwell when not pursuing the neighbouring populace.

As if all of this isn't surreal enough, however, it is popularly believed among the Napa locals that the flying monkeys were artificially created by some shadowy government scientist(s) either to detract attention from more serious events of the classic X-Files variety, such as covert surveillance by mysterious black helicopters and Doomsday trials, or even as an attempt to create a futuristic type of soldier, and that they are part-monkey and part-robot. Hence they are commonly dubbed Rebobs locally. Interestingly, however, the First Nation people of Napa have supposedly been long familiar with these entities, considering them to be an ancient race of beings, and they refer to this particular area as the Valley of Fairies. 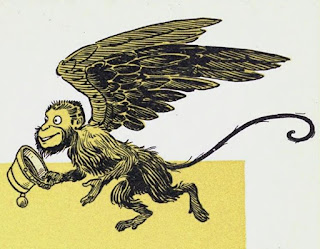