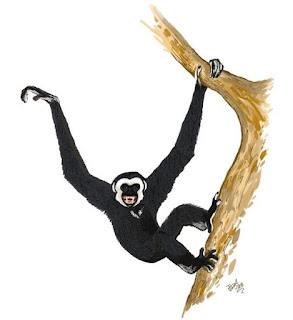 In June 2018, a new species of extinct gibbon was officially described and named in the journal Science, and was so different from all others that it also required the creation of a new genus in order to accommodate it. But what made this find more remarkable still was that instead of merely being another fossil species, one that vanished way back in prehistoric times, this new gibbon may have only died out a few centuries ago, i.e. during historical times, and was therefore familiar to modern humanity.

Hailing from China, it was formally dubbed Junzi imperialis by a team of researchers that included Dr Sam Turvey from the Zoological Society of London's Institute of Zoology, and with whom I have been communicating regarding their highly significant discovery. It is presently known from a single partial cranium and mandible found inside the tomb of an important noblewoman named Lady Xia in central China's Shaanxi Province, dating back approximately 2,300 years, alongside the remains of several other animal species, including leopards, lynx, cranes, various domestic animals, and a black bear. It may have been a pet, because gibbons were highly prized in this capacity within China back then. Lady Xia was the mother of King Zhuangxiang of Qin and the grandmother of Qin Shi Huang, who was China's first emperor.

The research team believes that subsequent extinction of Junzi imperialis probably resulted from adverse human activities, such as hunting and habitat destruction, which, if correct, would mean that this is the very first species of ape known to have died out due to such interactions. Moreover, the team also considers it likely that this is not the only Chinese gibbon species to have become extinct in historical times – the researchers believe it possible that additional lately-lost species still await formal discovery in this huge country via the eventual unearthing of preserved physical remains. 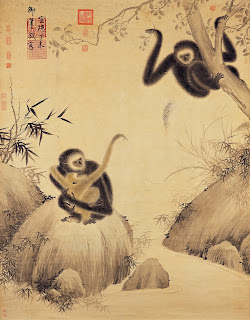 A Chinese painting of gibbons at play, dating back to c.1427 AD (public domain)

There is a second, equally intriguing but entirely independent line of evidence indicating that this prospect may indeed be true. A number of early classical Chinese paintings exist depicting gibbons that do not resemble any Chinese species currently still in existence. True, these may conceivably be very stylised portrayals of still-surviving Sinian gibbons, or they may even be representations of non-native specimens brought into China from elsewhere in Asia as exotic, greatly-valued pets.

However, there is also an exciting third possibility – that such illustrations are bona fide depictions of native but now-extinct Chinese gibbon species, perhaps including the newly-unveiled J. imperialis. Moreover, this would not be unprecedented - species such as China's very own giant panda and Roxellana's snub-nosed monkey, as well as Africa's gerenuk and Grevy's zebra, for instance, were all first made known to science via early pictorial evidence before physical, tangible evidence of their reality was obtained.

I now look forward to further discoveries of this same nature being subsequently made in China, providing new, significant glimpses of the gibbons from this vast land's distant – and perhaps not so distant – past. 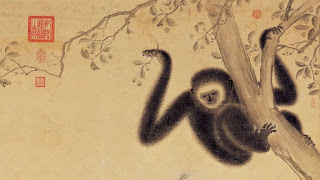 Detail from the c.1427 AD Chinese painting included in full above (public domain)