MAPPING OUT THE NANDI BEAR 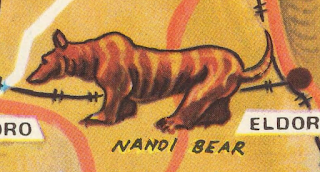 Last year on ShukerNature, in my extensive documentation of what may well be the single most significant episode ever recorded concerning Kenya's most infamous cryptid (click here to read my blog article), the ferocious Nandi bear, I made particular reference to an article on this elusive creature by Gordon Boy that had been published in the October-November 1998 issue of the periodical SAFARI Magazine.

However, in his SAFARI article, Boy included one additional but fascinating Nandi bear nugget that I specifically didn't allude to in my own. This was because I felt that it deserved its very own, separate coverage on ShukerNature (and also because I wanted to research it further first, which I have since done). So here it is now. 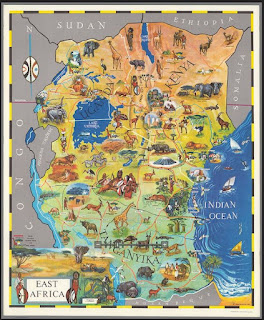 Boy stated that an illustrated full-colour map of East Africa by John McKenzie and simply entitled East Africa (see above scan of it) included a depiction of a strange-looking creature that was actually labeled on it as a Nandi bear. He also stated that the map had been produced in 1952. In reality, however, when I researched this item, I discovered that it had actually been produced in 1961, not 1952, in Nairobi, Kenya; its printer/engraver was East African Standard Ltd.

Boy included a reduced-size reproduction of the entire map in his article (the map's full size is 70 cm by 57 cm), but this reproduction is not big enough for the individual animal depictions in it to be anything other than minuscule. When enlarged, however, they are all rendered clear enough to be readily identifiable with known species – all, that is, except for the Nandi bear depiction, which does not resemble any species currently known to science. Nor, for that matter, does it correspond with any eyewitness description of the Nandi bear. 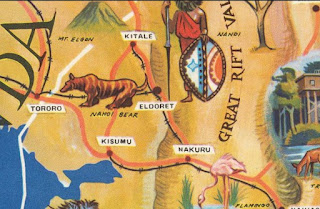 On McKenzie's map, the Nandi bear illustration appears north of Eldoret, on the Uasin Gishu Plateau [in western Kenya]. The illustration shows a massive, dog-like quadruped, with short hair, of a banded brown-and-yellow colour, and with very stocky limbs, a humped back, and a sharply pointed snout. But what is the Nandi bear doing here? It is, after all, the only creature depicted on this map whose existence, even now, has not been verified by science. Or was its inclusion just a mischievous prank on the map-maker's part? The legend of the Nandi bear is not without its pranksters...

This is very true. However, tempering Boy's above statement is another one made by him when introducing his account of McKenzie's map:

The Nandi bear is pictured on some of the old illustrated wildlife maps of East Africa, published during the Colonial era.

In short, there are other old maps out there somewhere that also contain Nandi bear depictions, which in turn reduces the possibility that its included portrayal on the McKenzie example was merely a prank. Needless to say, I have sought to uncover such maps, but as yet I have not succeeded in doing so. Consequently, if anyone reading this ShukerNature blog article of mine knows of any or can offer relevant information concerning them, I'd greatly welcome details.

For the most comprehensive modern-day coverage of the Nandi bear in published form, be sure to check out my book Still In Search Of Prehistoric Survivors. 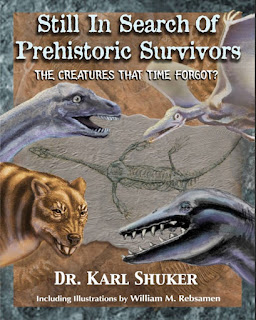